The Elect Methodists is the first full analysis of Calvinistic Methodism, covering both England and Wales. Within the margins of a chronological canvas, it paints a thematic picture of a colourful movement that emerged as an alternative to the more familiar Methodist grouping led by John Wesley. Calvinistic Methodists were ‘elect’ because they were certain that God had chosen a peculiar people to save. No belief could have set them at a greater distance from the Wesleyan conviction that everyone stood on a level spiritual playing field before a God who harboured no favourites. The book’s ten chapters introduce Methodism as a whole and explain its context within the larger Evangelical movement. Yet with the emergence of larger-than-life figures, Calvinistic Methodism began to find its distinctive voice. Foremost among these voices were Howel Harris in Wales, and the eighteenth-century’s most sensational preacher, George Whitefield in England. Moreover, during its first decade such leaders moved easily and often between England and Wales and viewed their work as directed to the nation as a whole. This also was true of one of the most surprising players in the movement, a peeress of the realm, the Countess of Huntingdon. Although Wesley’s movement grew rapidly in England, Calvinistic Methodism – after some early successes – did not. While its organised growth in England was largely fleeting, the area of sustained Calvinist advance was in the Welsh-speaking parts of Wales. Indeed, the religious denomination ultimately formed in Wales was (and is) the only branch of Methodism that has ever called itself Calvinistic. The publication of The Elect Methodists is happily juxtaposed between the bicentenary of the establishing of the Calvinistic Methodist Church of Wales in 1811, and the tercentenary of the birth of George Whitefield in 1714. 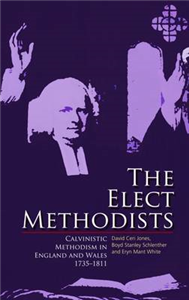