Talking the Walk: Should Ceos Think More About Sex?

Can professional and business women "talk the walk"? This book reports on academic research in this field but is written in an easy-to-read style for the general public.

Today, increasing numbers of women may aspire more and more to higher management positions. Indeed, today's young women expect promotional prospects in their chosen careers. But statistics show that they are not achieving the success they desire. The norm is still for women's progress in the workplace to be halted at junior management levels. Dr Julia Ibbotson, an academic and researcher, looks at some reasons why and suggests ways of reversing this trend.

In this book, the author presents research evidence from her study which explores the issues of management communication from a gender perspective in secondary schools in the UK. It arose from the author’s concern regarding the imbalance of men and women progressing to higher levels of management, as shown in the statistics published by the UK's Department for Education in a series of documents over 20 years. Current research also indicates that this picture has still not changed by 2011. So, what can be done to change it?

Evidence in this book looks at the possibility that there are gender differences in the way men and women managers talk in the workplace, which have the effect of undermining women's chances of promotion to higher leadership positions.

In other words, do women "talk the walk"? And should CEOs think more carefully about the gender balance of their management and leadership teams so that they can create more effective working groups fit for the economic issues of the twenty first century recession and post-recession? 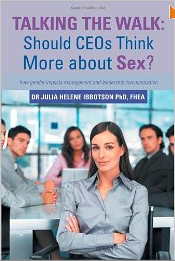