Border of Fire - Border of Ice

A dramatic, sensual and captivating love and escape story, set in the harsh reality of the Cold War in Europe and topical as never before now that a new cold war threatens to divide the European continent again.

The escape fails dramatically, and Leo and Lena seem to have lost each other forever. But later, in Leningrad, Lena develops a new, bold plan: To escape across the desolate wilderness border between Finland and Russia in midwinter.

However, first Lena must work at a kolkhoz on the Kola Peninsula north of the Arctic Circle. It is a godforsaken, cold and dirty place, and she meets hostility, hardship and brutality. The dramatic escape takes place on New Year's Eve. Militia checkpoints, border patrols, wolf packs, Soviet elite forces and brutally cold weather are a constant threat in the dark, empty ice-cold wilderness.

Border of Fire - Border of Ice is the story of a brave, warmhearted woman and her unflinching resolution to overcome all obstacles and find freedom and love. It's an exciting, captivating, feel-good story. 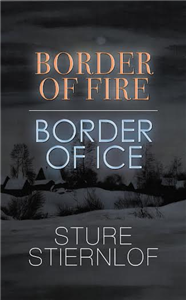 All rights: The author.

Novel presently available as hardcover, paperback and eBook at all major online retailers.

"A really good read, a love story set in the Cold War, exciting, sensual. Lena, the heroine of the novel, is an unforgettable young woman, strong enough to overcome extreme hardship and humiliation. The settings - like the death zone dividing Germany or the godforsaken Soviet kolkhoz on the Kola peninsula in the extreme north - feel entirely authentic".

"It's an intelligently written novel that combines an exciting narrative with perceptive insight into the human condition."

Sture Stiernlof grew up in a small iron-working community in Sweden. He worked as a journalist and foreign correspondent for 29 years in Stockholm, Malmoe, New York, Moscow, Bonn and London, and he served as a diplomat for 12 years in Bonn, St Petersburg and Seoul, where he was his country's ambassador. He has written numerous non-fiction books, covering subjects as far apart as the civil rights movement in the US, weapons of mass destruction, women's situation in the Soviet Union, environment protection and more. Border of Fire - Border of Ice is his first novel, written while living in Brighton and using some unique settings and insights acquired during his travels.