In this work, Adler explores how human beings differ from all other things in the universe. He brings to bear both philosophical insight and informed scientific hypotheses concerning the biological and behavioural characteristics of humankind. Rapid advances in science and technology, and the abstract concepts of that influence on man and human value systems, are outlined by Adler, as he touches on the effect of industrialization and the clash of cultures and value systems brought about by increased communication between previously isolated groups of people.;Among the other issues this study addresses are the scientific achievements in biology and physics which have raised fundamental questions about humanity's essential nature, especially the discoveries in the biological relatedness of all living things. Thrown into high relief is humanity's struggle to determine its unique status in the natural world and its value in the world it has created.;Ultimately, Adler's work develops an approach to the separation between scientific and philosophical questions which stands as a model of thought on philosophical consideration of new scientific discoveries and its consequences for the human person. 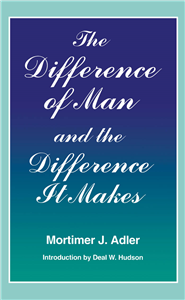