Historically, social researchers have shown a willingness to exploit new technologies to enhance, facilitate and support their various activities. However, arguably no other technological development has influenced the landscape of social research as rapidly and fundamentally as the Internet. This collection avoids both uncritical embrace and wholesale dismissal by considering some of the key literature in the field of Internet research methods.

Volume One: Core Issues, Debates and Controversies in Internet Research introduces themes and issues that run across all four volumes such as: epistemology, ontology and methodology in the online world; access, social divisions and the 'digital divide'; and the ethics of online research.

Volume Two: Taking Research Online - Internet Survey and Sampling addresses the range of resources, digital archives and Internet-based data sources that exist online from relatively straightforward and practical guides to such material through to more polemical pieces which consider problems relating to the use, access and analysis of online data and resources.

Volume Three: Taking Research Online - Qualitative Approaches considers the broad range of approaches to conducting researching via or 'in' the Internet. The focus is on conventional methods that have been 'taken online', and which in doing so, have become transformed in scope and character.

Volume Four: Research 'On' and 'In' the Internet - Investigating the Online World follows logically from that which precedes it in exploring how social research has been 'taken online', not simply through the deployment of existing methods and techniques via the Internet, but in researchers' increasing recognition and investigation of the online world as a sphere of human interaction - a socio-cultural arena to be explored 'from the desktop' as it were. 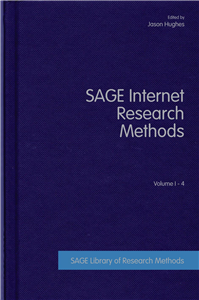