From Resurrection to Revolution 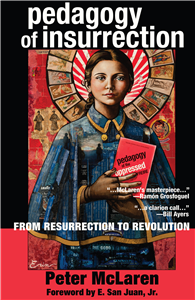 «Unabashed and undeterred, Peter McLaren offers a new manifesto, written from the ‘shabby lean-to room’ of the American hall-and parlor house that is revolutionary critical pedagogy. Pedagogy of Insurrection is yet another example of Peter’s unflinching critique of our contemporary moment of neoliberal capitalism and its contribution to our crisis of democracy. Beautifully written, creative, and broad and ambitious in its conceptual scope, Pedagogy of Insurrection offers a radical vision of human possibility and social transformation; a reclaiming of critical pedagogy’s connection to a political struggle – a philosophy of praxis. As Peter has argued for nearly four decades, nothing less than a global revolution can be our collective aim and, once again, with Pedagogy of Insurrection, McLaren has leapt into the breach, challenging, no, demanding that we follow him.»
(Ernest Morrell, Macy Professor of Education; Director, Institute for Urban and Minority Education; President, National Council of Teachers of English; Teachers College, Columbia University)
«In this dark night of the soul of global political economy, Pedagogy of Insurrection comes like a wild prophetic yell through the streets that would teach us of the radically democratic demand for revolutionary intolerance that must sound across the planet as never before. Here McLaren’s unparalleled pedagogical poetics rises up with new moral urgency to speak true words for and with humanity – an enflamed series of critical communiqués from the heart, these almost incantatory and expressionistic critical visions courageously unveil the global imaginary of violent corruption and terror and inveigh against the transnationally institutionalized denigration of the educational hope that we the people may still yet learn that the beloved community can be here now as soon as we demand it. Then, like non-GMO seeds scattered everywhere, this book salutes the diverse movements for the total liberation of life on earth that move us toward the eschatalogical omega point that will be the abolition of the masters of war and their historical domination of nature. ¡Hasta siempre, Comandante!»
(Richard Kahn, Core Faculty in Education, Antioch University Los Angeles)
«The modernist separation of church and state has functioned well to silence both radical discourses of spirituality and public life, even when they might point us toward formidable theological, pedagogical, and communal practices of resistance, insurrection, and transformation. In this unique and courageous revolutionary volume, Peter McLaren cultivates exciting new ground for rethinking a pedagogy and politics of global liberation, including formidable re-readings of historical figures and reasserting their place in the long recalcitrant struggle for human emancipation. At the very heart of this passionate manifesto lies a deep yearning for an ethical world that can propel us beyond the mania of racialized capitalism and its advancing destruction of the planet.»
(Antonia Darder, Leavey Endowed Chair in Ethics and Moral Leadership, Loyola Marymount University, Author of A Dissident Voice: Essays on Culture, Pedagogy, and Power)
«With Pedagogy of Insurrection, McLaren again makes it clear that he simply has no equal today in writing revolution as critical pedagogy. In this book, he brings a photorealist poetics to a searing political vision; he applies a street-savvy Marxism and a salvaged Jesus to contemporary social movements. His is a rage against the machine with the facts lined up, with history present, with teeth and heart bared. If this be McLaren’s manifesto for a new humanity, it is also, without missing a beat, his Ginsbergian Howl.»
(John Willinsky, Stanford University)