It’s comical and sad, and sometimes painfully true. A satire, a mockery, brought to the point of absurd, provokes indignation and bitterness (so open and so true it is). Sometimes it is very reverent and sincere, very human and heart melting. And sometimes it is almost impossible to resist a smile. Despite the bitter aftertaste of wormwood there is hope in the end — hope for a miracle, faith in the miracle.

The worlds of the Uzbek author Sukhbat Aflatuni are fantastically curious as mirage in the sands of a desert. They cunningly imitate reality, but as soon as the reader believes and is ready to dive deep into an outlined genre, the author chases the mirage away, and the reader sees that stereotypes are not working here. The novelle of «Letter on Clay Tablet» prove this.

Letter on the Clay Tablet

A new Teacher comes to a far away village, after his predecessor hanged himself, to teach children ancient mysterious alphabet which can help to return water to the village. People in the village are tormented by thirst, the water being hid in an underground reservoir by the greedy Leader.

On the one hand — modernity: cisterns with water, symbols of civilization remained from the Soviet times (a metal net bed in a house yard, TVs which do not work because there is no electricity), on the other — ancient construction as the centre of the rural world and untouched nature.

Water replaces money in this godforsaken corner, and allegedly serves a moral measure. No water — and there is less and less honor, kindness, conscience. «Evil conquers the good, because evil is stronger, smarter, more beautiful than the good», says Teacher. — But a miracle happens, and evil is at a loss«. And a miracle comes — letters scattered on the walls of the old bathhouse are formed into a prayer, and grace descends on the dehydrated, dried up village — streams of water, which from now on will forever change the life of the land for the better.

In the novella «Penuel» the patriarch, the head of the once large family Yakov — is, of course, the biblical Jacob. On the one hand, he survived the whole controversial and bloody 20th century and died at the age of a hundred and six. On the other hand, his ordeals and life aspirations are not unique, everything is repeated and has analogies up to the Old Testament history, and the main thing for man has always been procreation.

In «Year of Ramb»  the story of «new times» turns into a parable that everyone will be rewarded for his sins. 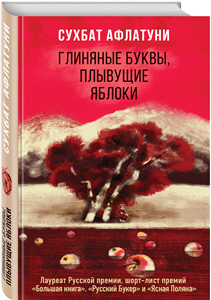 Let’s save effort expecting transparent plot from Aflatuni. And this is it. The plot is evident, but just at first glimpse.
Ekaterina Tarasova, «Independent Newspaper — ExLibris»

Deliberately stylized language of «Letters on Clay Tablet» leaves some scratching aftertaste — like the one left by sweet baklava.
Kirill Ankudinov, «Vzglyad.ru»

His «Asian pieces» are in some way an ideal prose, if it would exist.
Oleg Kudrin, writer