How to Rescue and Protect the World’s Oceans

In the blues of the world’s oceans swim stories of successful conservation efforts -- but while a pod of whales may be protected in one region, or a coral reef restored in another, the ocean is a singular, dynamic ecosystem, and using smarter hooks to control bycatch off George’s Bank is not likely to make a bit of difference to the waters of the Galapagos. Rather than continue to focus on discrete, geographically bounded bodies of water, ocean advocate and marine-policy researcher Deborah Wright urges a Plan Sea, which reimagines the oceans as the continuous ecosystem it is, not disconnected buckets of salt and plankton. This book proposes that the global marine environment be protected under the precautionary principle. It argues that the policy framework for such protection already exists -- it just needs to be enforced. In a series of case studies, with first-person vignettes woven throughout, Wright encourages us to begin every conversation about ocean policy with the assumption that any extractive or polluting activities in the world’s oceans should require special permission. Her argument invokes the Public Trust Doctrine already embedded in many constitutions, and hinges on the Law of the Sea, which was established by the U.N. in 1982 to protect the “high seas,” or the remote parts of the ocean considered international waters. To some, Wright’s plan may seem idealistic, but its audacity might also be seen as a welcome nudge to our collective imagination. Many scientists are convinced that ocean ecosystems are on the brink of collapse -- there’s something to be said, then, for a book that’s radical enough to unlock new thinking about what might be possible, and maybe necessary, in terms of their protection. 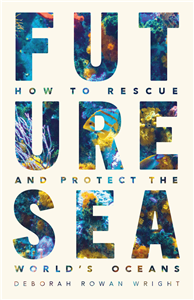 Deborah Rowan Wright is an independent researcher who writes about marine conservation. She has worked with the UK NGOs Whale & Dolphin Conservation, Friends of the Earth, and Marinet. Her work on marine renewable energy, ocean governance reform, and public-trust law has been published by the International Whaling Commission and the Ecologist, among others. In 2010, her policy document The Ocean Planet formed an integral part of Marinet’s Common Fisheries Policy reform campaign, and it won her Friends of the Earth’s Communication of the Year Award.