by Maria Mies and Vandana Shiva

This groundbreaking work remains as relevant today as when it was when first published. Two of Zed's best-known authors argue that ecological destruction and industrial catastrophes constitute a direct threat to everyday life, the maintenance of which has been made the particular responsibility of women. In both industrialized societies and the developing countries, the new wars the world is experiencing, violent ethnic chauvinisms and the malfunctioning of the economy also pose urgent questions for ecofeminists. Is there a relationship between patriarchal oppression and the destruction of nature in the name of profit and progress? How can women counter the violence inherent in these processes? Should they look to a link between the women's movement and other social movements? Maria Mies and Vandana Shiva offer a thought-provoking analysis of these and many other issues from a unique North-South perspective. They critique prevailing economic theories, conventional concepts of women's emancipation, the myth of 'catching up' development, the philosophical foundations of modern science and technology, and the omission of ethics when discussing so many questions, including advances in reproductive technology and biotechnology. In constructing their own ecofeminist epistemology and methodology, these two internationally respected feminist environmental activists look to the potential of movements advocating consumer liberation and subsistence production, sustainability and regeneration, and they argue for an acceptance of limits and reciprocity and a rejection of exploitation, the endless commoditization of needs, and violence. 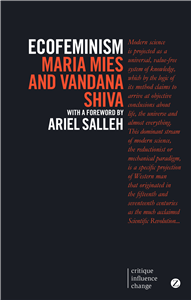 A powerful searing indictment of development strategies practised by the North on the South.

This book provides an extraordinarily productive framework for entire generations of scholars and activists' Michael Hardt, co-author of the Empire trilogy 'Ecofeminism is about the similarity of society´s relationship with nature and women. Mies and Shiva were the first to show the sad parallels in nearly all spheres of life, in the North as well as in the South. Their book belongs to the classical texts of a feminism that developed a more profound critique of modernity as "capitalist patriarchy" than Marxism, ecoscience and gender studies had done. Twenty years later the global spread of neoliberalism has resulted in the "death of nature", even of Planet Earth, and the death of women in many ways, leading to the emergence of new social movements worldwide.' Professor Dr. Claudia von Werlhof, University of Innsbruck, Austria 'This book is a light in the dark age of social and ecological crises. Not only does it interconnect the destructive tendencies of the capitalist patriarchal global politics of homogenization, fragmentation and colonization, but it also offers the subsistence perspective as a form of resistance and liberation within the limits of nature.' Ana Isla, Department of Sociology and the Centre for Women's and Gender Studies, Brock University 'This book is prescient: its time is now. It helps us to understand why women are taking the lead in the struggle to resist global forces endangering our survival and to forge a new society. The courage, radicalism and lucidity of Mies and Shiva twenty years ago still guide us on the path ahead.' Gustavo Esteva, grassroots activist and author 'The re-release of Ecofeminism after twenty years is auspicious and long overdue. Converging from widely divergent perspectives, Mies and Shiva achieved a profound conceptual synthesis: the rising of women, everywhere, to protect life from the capitalist patriarchal World System. Overturning all, like good cultivators, they prepare the earth for renewal.' Joel Kovel, author of 'The Enemy of Nature' Endorsements for the first edition: 'Maria Mies and Vandana Shiva, a German social scientist from the feminist movement and an Indian physicist from the ecology movement, are ideally suited to author a book of such broad intellectual, geographic, and political scope. while there are some notable differences in their approaches, they are crystal clear their adversaries as patriarchal capitalism, which they hold responsible for the colonization of developing countries, women, and nature.' - Karen T Litfin, University of Washington 'Read independently of the collection, many of the essays have innovative things to say to the political movements involved in fighting large scale development, nuclear energy, violence against women, wars and environmental destruction. Shiva’s discussion of the development establishment’s misnomer of poverty, her discussion of the biotechnology and the impact of GATT on third world women and informative political critique, and Mies on eco-tourism, German women’s response to Chernobyl, and her critique of body as property and self-determination in the context of surrogacy, are enlivening additions to important debates.' - Wendy Harcourt, Development Journal 'In view of the post-modern fashion for dismantling all generalizations, the views propounded in Mies’ and Shiva’s Ecofeminism make refreshing reading. They show a commendable readiness to confront hypocrisy, challenge the intellectual heritage of the European Enlightenment, and breathe spiritual concerns into debates on gender and the environment. Technology development could benefit from their plea that progress through the control of nature must be replaced by cooperation, mutual care, and love.' - Emma Crewe, Appropriate Technology Journal 'Vandana Shiva and Maria Mies offer an all-embracing vision. They show the interconnectedness of these problems and trace them to their source: how our modern world has been relating to Nature since the time of the Enlightenment right up to the biotechnology of today; how superiority to and dominance over Nature has ensured the violence inseparable from our civilisation. [...] For all those, and certainly for humanists, who are wrestling with the ethical, sexist and racist issues raised by invasive reproductive gene technology, Maria Mies’ chapters on these developments are a must: she subjects them to the most thorough and thoughtful investigation based on what I see as sound humanist as well as feminist philosophy.' - Gwen Marsh, New Humanist 'Dual authorship at its best, these complementary perspectives of an Indian physical scientist and a German social scientist combine to bring feminist scruples to bear on the environment, new reproductive technologies and masculinist thinking.' - WATERwheel '[Ecofeminism] presents a very focused, searing indictment of development strategies practiced by the North on the South.' - Anne Stratham, Feminist Collection

Maria Mies is a Marxist feminist scholar who is renowned for her theory of capitalist-patriarchy, which recognizes third world women and difference. She is a professor of sociology at Cologne University of Applied Sciences, but retired from teaching in 1993. Since the late 1960s she has been involved with feminist activism. In 1979, at the Institute of Social Studies in The Hague, she founded the Women and Development programme. Mies has written books and articles that deal with topics relating to feminism, third world issues and the environment. Her other titles published by Zed Books include The Lace Makers of Narsapur (1982), Women: The Last Colony (1988), Patriarchy and Accumulation on a World Scale (1999) and The Subsistence Perspective (1999). Vandana Shiva, a world-renowned environmental leader and thinker, is director of the Research Foundation on Science, Technology, and Ecology. In 1993 Shiva won the Alternative Nobel Peace Prize and in 2010 was awarded the Sydney Peace Prize for her commitment to social justice. She is the author of over twenty books. Her other titles published by Zed Books are Staying Alive (1989), The Violence of the Green Revolution (1991), Biodiversity (1992), Monocultures of the Mind (1993), Biopolitics (1995), Stolen Harvest (2001), Protect or Plunder (2001), Earth Democracy (2005) and Soil Not Oil (2009).