The author of this book was born in Barcelona and raised as a Roman Catholic in Franco’s Spain. Many years later, after the long illness and death of her mother, Dory Sontheimer discovered, in the false ceiling of her mother’s home, seven boxes that were to reveal/uncover an identity and a past both unknown and dramatic. Organizing this emerging legacy, made up of photographs, letters, Passports and other documents, Sontheimer reconstructs the timeline of her family. Over twelve years, moved by a combination of fascination, curiosity and a sense of duty, Dory completes the investigation which takes her to Germany, Israel, the USA, Canada, Argentina, Brazil, Austria, UK and the Czech Republic. In this way she followed the traces of one of many families that became victims if the industrialized massacre of Jewish people. Refugees in Barcelona as a prevention and a way of fleeing the advance of Nazism, Dory’s parents started a new life which made them deny their origins and take on a new language, name and trade which were not their own.

This disturbing testimony, which combines the value of a documentary with the light and sincerity of the author, dissects some of the more domestic aspects of the drama the victims experienced. The testimony verifies the pain and sense of guilt of the survivors who had to adapt to their situation as exiles or stateless citizens and bury beneath a slab of silence the rumbles and truth about their past. Without any rhetorical showing off, Dory Sontheimer has written a tale, out of the painful treasure she discovered, exposing the forgotten: documenting the life of Jewish refugees in Spain. As a response to the foresight of those who left the testimony in seven boxes, she managed to bring members of her family out of oblivion and to overcome distances imposed by the tragedy: they themselves discovered emotions which the reader shares until the very end. 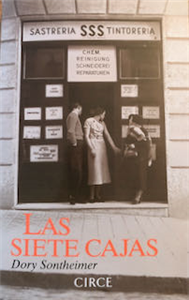 Contact pjimenezdeparga@gmail.com for information on rights or to request a review copy.

The author of this book was born in Barcelona and educated as a Catholic in Franco's apostolic and Roman Spain. Many years later, after the long illness and death of her mother, Dory Sontheimer discovers, in the attic of her home, the seven boxes that reveal to her an identity and a past as unknown as it is dramatic. Sorting through this emerging legacy of photographs, letters, passports and other documents, Sontheimer reconstructs the chronicle of her family. For twelve years, driven by a mixture of fascination, curiosity and a sense of duty, she completes an investigation that will take her to Germany, Israel, the USA, Canada and the Czech Republic. In this way, she follows the trail of one of the many families who were victims of the industrialised slaughter of Jews. Precautionary refugees in Barcelona, fleeing the ravages of Nazism, Dory's parents began a new life that forced them to deny their origins and to adopt a language, a name, a creed and a profession that were not their own.
This disturbing testimony, which alternates documentary value with the luminous sincerity of its author, dissects the most domestic aspects of the drama experienced by its victims and bears witness to the pain and guilt of survivors who had to adapt to their condition as exiles or stateless people and bury the thunderous truths of their past under the slab of silence. Without rhetorical flourish, Dory Sontheimer has written an account that documents the lives of Jewish refugees in Spain from a painful treasure that emerges from oblivion. Responding to the foresight of those who left this testament in the form of seven boxes, she succeeds in making the family members finally overcome the ignorance and distance imposed by the tragedy and discover themselves with an emotion that the reader shares to the last word.