A rogue reporter vs the masters of the universe

During his time at the Financial Times, investigative journalist Matt Kennard uncovered a scam, a deception and rip-off of immense proportions. From slanging matches with Henry Kissinger to afternoon coffees with the man who captured Che Guevara, Kennard's unbridled access over four years to the creme de la creme of the American elite left him with only one conclusion. The world as we know it is run by a squad of cigar smoking men with big guns and big cash, and the racketeer's reach is far too close to home. It's time for the world's citizens to uncover the racket. 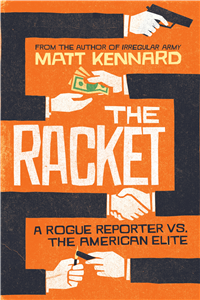 An investigation of how the US empire continues to enslave much of humanity, both at home and abroad.

"I have been following Matt Kennard's work for years. He is a fine journalist and political analyst, acute and perceptive." Noam Chomsky "An exceptional author. Matt Kennard never tries to paint a pig pretty. Thanks, Matt, for keeping it ugly." Hunter Glass, former gang investigator for the US military

Matt Kennard is a Fellow at the Centre for Investigative Journalism in London. He is the author of the critically acclaimed 'Irregular Army' (2012), and has worked as a staff writer for the Financial Times in London, New York and Washington DC. He has written for the New York Times, the Chicago Tribune, and the Guardian. He graduated as a Stabile Investigative Fellow from the Columbia Journalism School.