The chimera of the vanquished

"The shoemaker's bell rang again". An old shoemaker who lost everything and had to learn to naturalise misfortune.

A tyranny that has ravaged the region relentlessly for decades.
Murders, disappearances, torture and a perceptive young man who works in one of the Regime's factories and has never known freedom.
An organisation of insurgents fighting oppression from the shadows.
Two intertwined destinies.
A life in which everything was lost.
Another in which nothing was ever had.
A struggle to achieve freedom.

The chimera of the vanquished (La quimera de los vencidos) is about the loss of what is dearest to you, about finding a ray of light in the darkness, about hope, about structural injustice and about the desire for a better world. 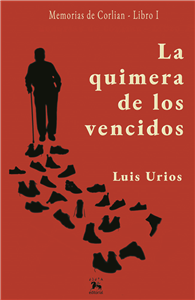