The Changing Dynamics of the Relations among China, Taiwan, and the United States

Ever since Chiang Kai-shek and his Kuomintang evacuated to Taiwan at the end of the Chinese Civil War in 1949, China and Taiwan have been divided by a fundamental and irreconcilable sovereignty dispute over Taiwan’s international status. In addition, the United States has played a central role in the rivalry between Beijing and Taipei. Despite the immutable nature of this sovereignty dispute between China and Taiwan, the triangular relations among Beijing, Taipei, and Washington have changed quite considerably over time. Over the last three decades, for example, relations in the Taiwan Strait were fairly tranquil during the 1980s and early 1990s, became much tenser from 1995 to 2008, and then reverted to amicable relations among China, Taiwan, and the United States after the election of a new Taiwanese President in 2008.

This book seeks to understand and analyze the relations among China, Taiwan, and the United States in the early twenty-first century. In particular, it explores what causes change in the relations among Beijing, Taipei, and Washington and how stable the new era is likely to be. Consequently, special emphasis is placed on the factors promoting change or stability in the interactions among these three countries and upon the policy choices facing their governments. The major topics include the dynamics of the “strategic triangle” that defines cross-Strait relations (Chapters 2 to 4 and 8), the domestic politics and policies of Taiwan and China (Chapters 3 to 8), and the growing economic integration across the Taiwan Strait (Chapters 9 to 12). Overall, the future of this trilateral relationship appears to be fairly open-ended. Despite the current rapprochement, the ultimate goals of China and Taiwan remain incompatible; cross-Strait relations remain a viciously polarizing issue in Taiwan’s domestic politics; and there is profound scholarly disagreement over the broader implications of the growing economic ties across the Strait. 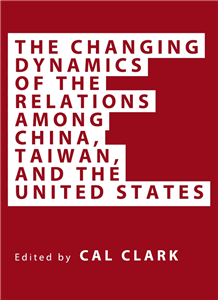 Cal Clark is Alumni Professor of Political Science and MPA Director at Auburn University, Alabama, USA. He has been Visiting Professor at Chung Yuan Christian and Tunghai Universities in Taiwan. His books include the authored Taiwan's Development; the co-authored Flexibility, Foresight, and Fortuna in Taiwan's Development, Women in Taiwan Politics, Comparative Development Patterns in Asia, and Taiwan: Confronting the Costs of Success. He has been President of the American Association for Chinese Studies and participated in the US State Department’s Speaker Series of lectures in Japan.

Cambridge Scholars Publishing has chosen to review this offer before it proceeds.