Struggling artist corey fischer is in big trouble. A lifetime of deference and masked inner-feelings has blinded him to the truth in others, even as those truths emerge onto the canvas of his paintings. The sudden death of his estranged father brings Corey downricer to his hometown of Pepin, Wisconsin, where he confronts past and present torments. The taunting inheritance of a pair of hunting rifles from his dead father, together with lukewarm reunion with his mother, launches an unraveling of the tenuous ties binding Corey's life together. The inheritance delivers Corey and his husband, Nick, to the Fischer family cabin in northern Wisconsin during hunting season where they head into the woods with loaded guns and years of simmering resentment. Emotions explode as the couple tracks a wounded eight-point buck at dusk and as Nick's betrayals are accidentally revealed. Corey makes a series of panicked, life-defining choices that propel him to flee the trail of destruction his life has wrought and to seek comfort from those who loved him all along. 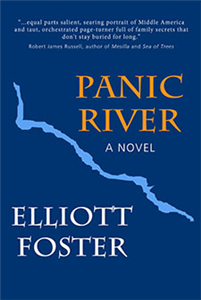 All rights are available.

"Elliott Foster has written a tremendous novel, at once a testimony to courage and friendship and family bonds, Panic River is also wickedly intense and psychologically riveting. It is, in other words, the sort of novel that touches on every reading pleasure." —Peter Geye, Author of Wintering.

“Elliott Foster became the voice of Minnesota cabin land with Whispering Pines. Now he crosses the river into rural Wisconsin with his darkly droll novel, Panic River. Foster writes characters that are so real and lovably imperfect that you want to shove anyone who bullies them down the staircase of character Corey Fischer’s mother’s home—straight into the outhouse in her basement. The spark has been dwindling
between Corey and his husband Nick, who has not been telling the truth. But in turning the pages I discovered that Corey and his family have more secrets of their own than there are deer in Barron County. And so begins the panic-filled hunt for the real meaning of Corey’s inheritance.” —Catherine Dehdashti, Author of Roseheart

"Elliott Foster has dared to be honest in his newest work Panic River. Set in familiar Upper Mississippi River
locales, his novel takes us to the secret interiors of familiar faces and their outdoor lives. His exploration of marriage, family, sexuality and gender identity is courageous, insightful, and compassionate, and his story has cliff-hanger qualities that make it a page turner." —Emilio Degrazia, Minnesota Book Award-Winning Author & Poet.

"Foster’s hero is a man in pain, and the way forward hurts even more. But walls come down, hearts open, and there is such pleasure in sharing the journey." —Sandra Scofield, National Book Award Finalist and American Book Award Winning Author of Beyond Deserving and Swim: Stories of the Sixties.

"Panic River is a marvel: equal parts salient, searing portrait of Middle America and taut, orchestrated page-turner full of family secrets that don't stay buried for long. Foster offers up an exquisitely-crafted panoply that grapples with American angst, toxic masculinity, identity, and the expectations we face every day of our lives, all handled with tenderness and deft skill. Yes, this is a luminous novel; I'll happily follow
Foster wherever he goes next." —Robert James Russell, Author of Mesilla and Sea of Trees.

(4 out of 5 stars):
Corey Fischer is a struggling artist who once had a dream to become a great artist. After meeting his spouse, Nick, Corey is grateful for meeting someone who treats him so well and who supports his creative endeavors. Nick does not seem to mind supporting both of them. Corey's parents, on the other hand, are not happy that Corey is gay, especially his father. But things aren't all puppies and roses in Corey and Nick's relationship. Nick has cheated on Corey before, and when Nick goes away on a business trip for the
bank he works at, Corey is convinced that he is there with a married co-worker named Evan. Corey decides to take his life at that point but is unsuccessful.

I found this book to have an interesting plot that started out well; however, as the story moved on, I started to not like the main character very much. He was just so needy throughout the book that I wanted to roll my eyes and tell him to just "man-up," which is exactly what Corey's father always told him to do because
he acted like such a wimp in any circumstance. I could almost feel Corey's anxiety through the pages of the
book every time he was thrown into a different situation. He had a hard time adapting to anything and had very low self-esteem on top of that. Throughout the book, it was said several times that Nick was a jerk. And although his cheating was unacceptable and he stepped over the line several times while talking to
people, including Corey's mom, I never got the vibe that he was necessarily a jerk. I would say he was just more forthcoming and blunt with his communications.

The craziest part of the book happens near the end though, and without spoiling it for other readers, all I have to say is, "What happened next?" Corey goes a bit off the deep end, but the book closes with a few strings left untied and I'd love to know what happens next for everyone in the book.

Overall, this book was a fascinating read about love, tough love, and all of the complicated relationships that
happen when a person decides to be him or herself. Well-written with all types of little life lessons thrown in, this book was engaging and entertaining. A book well worth reading, geared towards young adults
to adults. —Kristi Elizabeth, San Francisco Book Review

More reviews can be found here.

Elliott Foster is the author of Whispering Pines, a 2015 Indie Book Award national finalist. His poetry has been published in The Green Blade literary journal, and he co-authored the 2019 memoir Retrieving Isaac & Jason with his father, Ken Flies. Elliott lives in Minnesota with a dog named Louie to whom he reads excerpts from his forthcoming work, a sequel to Panic River.

Calumet Editions has chosen to review this offer before it proceeds.