ESPARTACUS PRIZE 2020 - "I am Don Pedro Blanco. Slave trader. Madman. Giant or monster. Mongo Blanco. The Great Wizard, the Mirror, the Sun. The King of Gallinas. Pirate. Father. Brother. From the slums of Malaga to an African throne, from the wonders of Havana to a madhouse in Barcelona. A pistol. If I had a pistol, I’d spatter the walls with my brains. This is the story of my guilt and my penitence."

Following his father’s death, Pedro Blanco leaves Malaga and goes to sea in search of a better future. Both cunning and determined, he gradually makes his way in the world and becomes Mongo Blanco, one of the greatest slave traffickers of the 19th century. But when he is betrayed by somebody close to him, his fall into disgrace begins. He recounts his story to the doctor in the asylum to which he has been confined, little suspecting that his story has not yet finished and that a figure from his past has returned to collect an outstanding debt. In his final years, Mongo Blanco will have the opportunity to redeem himself or finally fall victim to his own excesses.

Carlos Bardem’s latest novel is the thrilling epic of a real historical character, the powerful and legendary Mongo Blanco. Spain, Cuba and Africa provide the settings for this engrossing story, carefully documented and written with great attention to detail and astonishing emotion that will leave lovers of historical fiction, adventure novels and literature in general gasping for breath. 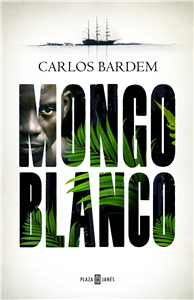 “Don Pedro Blanco’s confession is an authentic testament to madness discovered in the magnificent imagination of Carlos Bardem. Mongo Blanco is unburied treasure, a chronicle of madness rescued from the still beating heart of darkness”. - BARRY GIFFORD (Wild at Heart, Perdita Durango)

“A haunting exploration of the darker side of the human race, of the nature of madness and sanity. A brilliant novel, stylistically dense, reminiscent of Lobo Antunes or a
darker Gabriel Garcia Marquez. Bardem is a genius”. - PHILIPP MEYER, finalist of the Pulitzer Prize and author of The Son

Carlos Bardem (Madrid, 1963) is an actor and writer. He has a degree in History and a Master’s in International Relations, and published his first book, Durango Perdido, in 1997.
He made his debut as a novelist with Muertes ejemplares (Exemplary Deaths), which was shortlisted for the Nadal
Prize. His second book, Buziana o el peso del alma (Buziana or the weight of the soul), won the Destino-Guión Prize in 2002.
With Plaza & Janés, he published La Bardem in 2005, a biography of his mother, Pilar Bardem, a leading Spanish actress and political activist, and Alacrán enamorado (Lovestruck Scorpion) in 2009, released as a movie in
2013.
His novel, Mongo Blanco, immediately became a best-seller and was awarded the Spartaco Prize 2020 to best Spanish historical fiction.