The Story of John Mccarthy

John McCarthy MBE, of McCarthy & Stone, is a self-made multimillionaire. He and his family have been long-term members of The Times Rich List. One of the best examples of the self-made man, John started working life at fifteen as a "chippy". Every venture he has embarked on, he has achieved with drive and success. His legendary reputation is as the most successful builder of retirement homes across Europe. He has also built and skippered winning ocean-racing yachts. He has owned and run a top polo team. He became a big game hunter and avid game bird shooter, underwater diver, skier and squash player. He makes other septuagenarians look really old.In this book John McCarthy recounts his fascinating life story so far. But these are not just the interesting memoirs of a successful man. John's tussles with bankers and lawyers, planners and politicians, Government red tape and political autocracy, competitors and recalcitrant employees tell a story that has real relevance to all aspiring entrepreneurs in whatever field of endeavour. John McCarthy's rules of engagement and how to build a billion pound company are as topical now as they were when he did it. 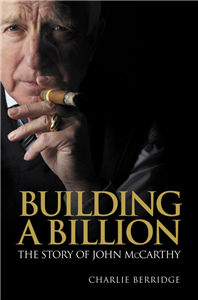