What can literature teach us about resilience in the face of climate change and planetary-scale vulnerability? In “Weak Planet, Resilient Networks,” Wai Chee Dimock proposes a way forward by showing how writers have met past hazards with experiments in non-paralysis, and how their works still inspire readers to “find their strength.” Dimock looks for hope not in heroic resistance but in the unspectacular and inconclusive. Focusing on tenuous networks among authors and unstable phenomena such as genre, she shows that literature’s durability is at once weak but vital. Dimock’s literary history pays special attention to low-grade, low-threshold phenomena that, in not being developed to their fullest or most forceful extent, have often been overlooked. Along the way, she considers Louise Erdrich’s and Sherman Alexie’s reclamation of Mary Rowlandson; elaborations of Moby-Dick in works by C. L. R. James, Frank Stella, and Amitav Ghosh; weak forms of Irishness in Colm Tóibín, Oscar Wilde, and W. B. Yeats, and the appearance of an atmospheric Islam in works by Henri Matisse, James Joyce, Ezra Pound, and Langston Hughes. Joining conversations in environmental humanities, disability studies, and several other fields, “Weak Planet, Resilient Networks” offers a new literary history along with new ways to think about our collective future. 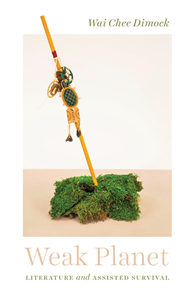 Wai Chee Dimock is the William Lampson Professor of English and American Studies at Yale University. She is the author of three scholarly books, most recently, Through Other Continents: American Literature across Deep Time.