Other books in the series (All rights are available):

In the Cauldron of Lebanon, he "disappeared." Now he's coming after her.

"Nadia, I think your husband is still alive!"

The Syrian is a powerful contemporary novel of passion and betrayal, set against the brutal and bewildering outbreak of the Israeli-Hezbollah war in Lebanon, 2006.

Nadia, a woman who has waited thirteen years for a husband who was "disappeared," finally decides to declare him dead so she can marry an American physician, Andrew Sullivan. On the eve of her engagement party, her best friend Sonia, a well-connected war correspondent, rings to tell her that her husband may still be alive in a Syrian prison. Out to get Andrew for herself, Sonia draws in the powerful head of the Syrian secret police to help her in her Byzantine manipulations. Thus begins a series of dangerous plot twists that become increasingly bloody as Nadia attempts to rescue her husband, and the border conflict with Israel escalates. 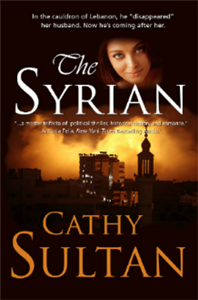 All rights are available.

"In The Syrian, Cathy Sultan has achieved a master trifecta of political thriller, historical fiction, and romance. This wickedly smart novel reminds us that politics is all about relationships and dares us to conceive that women are just as capable of sexual power plays as the men who have made careers by them for millennia. Sultan's expertise about the contemporary Middle East brings a breathless authenticity to the surprises that come at every turn." —Antonia Felix, New York Times Bestselling Author.

Cathy Sultan is the award-winning author of three nonfiction books: Beirut Heart: One Woman's War, Israeli and Palestinian Voices: A Dialogue with Both Sides, and Tragedy in South Lebanon: The Israeli-Hezbollah War of 2006. The Syrian, a political thriller, is her first work of fiction. Sultan is also an activist who sits on the Board of the Interfaith Peace Builders, an NGO based in Washington D.C. She has led several delegations to Israel-Palestine, and accompanied a delegation to Gaza in November 2012.

Calumet Editions has chosen to review this offer before it proceeds.