A text that transcends literary genres, this book concludes a path that runs through the author’s previous books: Al Ike fe Al Mabahej was Al Ahan (The Ike in the Joys and Sorrows) 2002, Kitab Al Ghewaya (The Book of Seduction) 2007, and Al Aar men Al Difatayn... Abeed Al Azmenah Al Hadethah fee Marakeb Al Tholomat (Shame on the Two Banks: Slaves of Modern Times in the Boats of Darkness) 2011.

The theme of the book focuses on travel as a human activity and an example of human life. Hence the novel’s philosophical approach manifests itself as an examination of the different stages of travel as a metaphor for man’s journey from life to death.

With this philosophical view the writer's prose fuses with cities and travel experiences, diving deep to describe the souls of the cities, going far beyond what can be captured by a camera.

The book contemplates the styles of architecture and the meanings they represent, reflecting on the meaning of beauty and perfection, as well as the nature of aggression that resides in them. It reflects, too, on the meaning of living on an island and the symbolism of water, which makes travel a unique experience that increases the depth of life and compensates us for our short existence.

The writer examines his visions by invoking publications that highlight travel, including The Thousand and One Nights, which he considers to be a travel book. 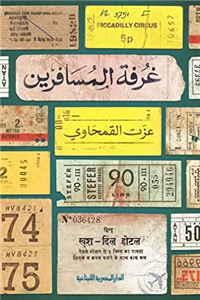 Shortlisted for the 2021 Sheikh Zayed Book Award for Literature

Ezzat El-Kamhawi is an Egyptian novelist, born on December 23, 1961, he has published 15 books. His novel Beit El Deeb (The Wolf’s House) won the Naguib Mahfouz Medal for Literature in 2012 and was translated to English and Chinese, while Madinat Al Lathah (The City of Pleasure) and Al Aar men Al Difatayn (Shame on the Two Bank) were translated into Italian. In 2018, his novel Yakfi Annana Ma’an (At Least We are Together) was shortlisted by the Sheikh Zayed Book Award. His works were the subject of several university theses, the most recent of which are: Identity in the novels of Ezzat El-Kamhawi – a thesis by researcher, Hoda Abdullah Abu Al-Maati, with which she obtained a doctorate degree from Suez Canal University in 2020.