The Boy Who Saw the Color of Air

In his first YA novel, cultural journalist and author Abdo Wazen writes about a blind teenager in Lebanon who finds strength and friendship among an unlikely group.

Growing up in a small Lebanese village, Bassim’s blindness limits his engagement with the materials taught in his schools. Despite his family’s love and support, his opportunities seem limited.

So at thirteen years old, Bassim leaves his village to join the Institute for the Blind in a Beirut suburb. There, he comes alive. He learns Braille and discovers talents he didn’t know he had. Bassim is empowered by his newfound abilities to read and write.

Thanks to his newly developed self-confidence, Bassim decides to take a risk and submit a short story to a competition sponsored by the Ministry of Education. After winning the competition, he is hired to work at the Institute for the Blind.

At the Institute, Bassim, a Sunni Muslim, forms a strong friendship with George, a Christian. Cooperation and collective support are central to the success of each student at the Institute, a principle that overcomes religious differences. In the book, the Institute comes to symbolize the positive changes that tolerance can bring to the country and society at large.

The Boy Who Saw the Color of Air is also a book about Lebanon and its treatment of people with disabilities. It offers insight into the vital role of strong family support in individual success, the internal functioning of institutions like the Institute, as well as the unique religious and cultural environment of Beirut.

Wazen’s lucid language and the linear structure he employs result in a coherent and easy-to-read narrative. The Boy Who Saw the Color of Air is an important contribution to a literature in which people with disabilities are underrepresented. In addition to offering a story of empowerment and friendship, this book also aims to educate readers about people with disabilities and shed light on the indispensable roles played by institutions like the Institute. 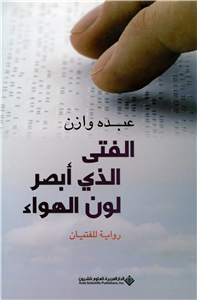 Abdo Wazen was born in Beirut, Lebanon in 1957. In addition to writing poetry and novels, he’s a French-to-Arabic translator and the well-known culture editor of Al-Hayat newspaper. His first collection of poems, The Locked Forest, was published in 1982. Since then, Wazen has published a number of other poetry collections, and a memoir, An Open Heart, after he had major heart surgery in 2010. The Lebanese Ministry of Interior seized copies of his 1993 book, The Garden of Sensation on accusations of licentiousness. He’s translated the poetry of Jacques Prevert and Nadia Twueni into Arabic. In 2005, he received the Culture Journalism Award from the Dubai Press Club.