The Art of Jazz

The Art of Jazz celebrates the ways in which the expressionism and spontaneity of jazz – the twentieth century’s most influential of musical art forms – spilled onto its album art, posters, and promotional photography, and even inspired standalone works of art. As John Edward Hasse, curator at the Smithsonian Institution Museum of American History, writes in the introduction: “Jazz appears most directly to the ear but also engages the eye. Yet the visual dimension of jazz is often overlooked.”

Internationally renowned broadcaster and writer Alyn Shipton explores how graphic designers, photographers, artists, and illustrators crafted a fresh visual language for the new music. Arranged chronologically, each chapter covers a key period in jazz history, from the earliest days of the twentieth century right up to postmodern jazz and the twenty-first century. Lavishly produced and with over 350 photos and illustrations, The Art of Jazz is both a timely and significant contribution to the literature of this intrepid art form. 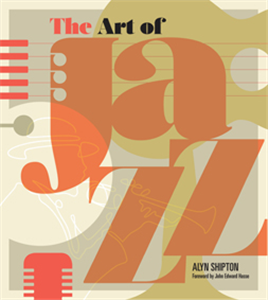 All other translation rights available.

Musician Shipton gathers over 300 colorful images of jazz paintings, studio photos, record covers, and posters in this vibrant illustrated history. John Edward Hasse, a curator at the Smithsonian Institution Museum of American History, writes in the introduction: “Jazz appears most directly to the ear but also engages the eye. Yet the visual dimension of jazz is often overlooked.” A detailed summary of early jazz follows—from the brass bands of New Orleans and Louis Armstrong to Duke Ellington, Bessie Smith, and Jelly Roll Morton—supported by a collection of eye-popping photos (a soft-focus head shot of Peggy Lee in 1947; Count Basie’s orchestra squeezed together onstage at New York City’s Famous Door jazz club in 1938) and artwork (such as Street Musicians, by Harlem-born abstract expressionist painter Norman Lewis). Meanwhile, noted illustrators, designers, and graphic artists such as Andy Warhol (who designed the cover of RCA’s 1955 album Count Basie), Verve Records’ David Stone Martin, and Blue Note’s Reid Miles provided album cover designs for bebop and modern jazz records. Other album cover images include those of the ever-evolving Miles Davis, Ornette Coleman, and 21st-century jazz musicians, Kamasi Washington among them. This indispensable work of the genre’s art is perfect for jazz aficionados. (Publishers Weekly - Oct.)

It’s known for its blue notes, its spontaneity, and its stars, from Billie Holiday and Ella Fitzgerald to Count Basie, Louis Armstrong, and Duke Ellington. Moreover, “if jazz means anything,” wrote Ellington, “it is freedom of expression.” A new book from the writer, broadcaster, and bassist Alyn Shipton collects more than 300 images—“Visualizations of the musicians, their milieu, and their music as metaphor,” writes John Edward Hasse in the foreword—in a vibrant visual history. By the time the word “jazz” made it into The Oxford English Dictionary—and as a supplement, no less, the original 1928 edition having appeared without it—the Jazz Age was in full swing. It left the dictionary in the dust, “creating unforgettable and vivid sonic paintings,” writes Hasse, and encouraging in its musicians “that leeway to experiment, to find and put forward one’s personal voice and style” that made their music so enduring. —Julia Vitale (Airmail newsletter) https://airmail.news/issues/2020-6-27/all-that-jazz

ALYN SHIPTON is a recognized international authority on jazz. He is the author of A New History of Jazz (Bloomsbury), which has become one of the standard works. He served on the editorial board for the original Smithsonian Collection of Classic Jazz and on the executive selection committee, with John Hasse, for the updated 6‐CD collection, Jazz: The Smithsonian Anthology (Smithsonian Folkways, 2011). He has also written acclaimed biographies of jazz musicians, including Fats Waller, Dizzy Gillespie, Ian Carr, Charlie Parker, and Cab Calloway. His 2013 biography of singer/songwriter Harry Nilsson won the ARSC award for best pop research and an ASCAP Deems Taylor award for pop biography. He is a fellow of the Royal Academy of Music, London, and jazz critic for The Times. He is senior producer for BBC radio’s Jazz on 3. In 2003 he won the Willis Conover / Marian McPartland Award for Jazz Broadcasting, and in 2010, the Parliamentary Award for Jazz Broadcaster of the Year. He has written and presented programs on Ornette Coleman, John Coltrane, Gerry Mulligan, Fats Waller, the Newport Jazz Festival, and Django Reinhardt’s roots in continental Europe, among many others. He performs jazz double‐bass in the Buck Clayton Legacy Band and Larkin’s Jazz. His work has taken him across the US and Europe. He lives in the UK and France.

Elephant works with leading publishers worldwide to create both illustrated and text-only titles on art & design, literary subjects & social history, pop culture & music, and space-related titles, and on both medical and recreational marijuana. Several titles have won awards; others – such as Cannabis Pharmacy by Michael Backes, The Art of Feminism (multiple authors) and Stephen Jones's The Art of Horror series – are acknowledged to be the definitive text on the subject. Quality in all matters editorial, plus stand-out design, characterize Elephant's titles, which are published in the U.S. & Canada, throughout Europe, and in Russia, China and Japan.

Elephant Book Company Ltd. has chosen to review this offer before it proceeds.