There is a unique, beautiful and practical art book, travel companion and memento that tourists to South Africa and South Africans themselves can use and admire. It is the Taxi Hand Sign book, created and researched by fine artist Susan Woolf.

In South Africa, if you want to catch a ride on a mini taxi bus, you have to know the correct hand sign to show passing taxis so that the driver can stop for you if he is going in that direction. Most people only know three or four signs, which are the routes they take every day. Before this book existed it was very hard to find out which signs went where; you'd have to ask a designated person at a major taxi rank - if you could find them.

For the past ten years Susan Woolf has been researching and documenting the hand signals relating to taxi routes in South Africa. This 10cm by 10cm booklet (which you can slip into your back pocket) contains contains beautifully and playfully rendered taxi hand signs, with a Table of Contents in front that indicates routes and destinations and connects them to the appropriate hand sign. There is also an artfully concealed folding map at the back, which shows routes in Gauteng, Soweto and the Johannesburg CBD, in London Underground fashion. Never before have the hand signs been collated and connected to their routes and never before has there been a map that shows the actual taxi routes - not even the taxi associations have them.

Susan also invented a series of symbols that, when combined in different ways and raised on paper, enable blind people to learn and use the signs themselves, as well as teach them to their sighted children. A book called "Taxi Hand Signs for the Blind" was printed in Braille with the symbols and launched in September 2009.

10 of these hand signs (blind and sighted) were chosen for the 2010 South African National Stamp. These were launched in January and were acknowledged all over the world during the 2010 soccer world cup. 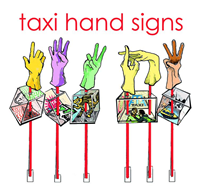 World-wide articles and media coverage on Woolf's taxi hand signs, especially at launch time in 2010. The most recent was an article in Tel Aviv university magazine in May 2015.

"As an artist [Susan Woolf] has rendered artistic impressions and collated 26 hand signs, connecting them to their various routes. It’s a book that, should you intend commuting by taxi, is a must-have."

"Woolf has placed in the space the language that is used everyday. And even though the gestures are silent, they are alive, awakening the imagination to the thousands of interactions and transactions that take place on roadsides daily."

"The Taxi Hand Sign Booklet, first published in May 2007, was a record for the main libraries in South Africa. Taxi hand signs are used on a daily basis by millions of South Africa’s taxi commuters to indicate the destination of their choice."

"Using [The Taxi Hand Sign books], commuters can travel with ease as the destinations are accompanied by the relevant hand sign...]

Symbolism, meaning and communication are intrinsic to Susan Woolf’s artwork, which is generally historically or socially based.

Past artworks include Woolf’s installation Healing and 30 Art Books were exhibited in Museum Africa 1997 – 1998. A five storey high aluminium kinetic Mobile City for Absa Bank was a collaboration with two architects, Levin and Cawood in 1999.

Woolf is documenting Taxi hand signs in South Africa for sighted and blind people. She published an A6 Taxi Hand Book with ada enup. It was the subject matter for an exhibition in 2010 and towards her doctoral thesis in Anthropology and Art at Wits University.

Her work on view on the Mandela @ 90 exhibition (Constitutional Court 2008) related to her solo exhibition Towards Mandela, which was held at the King Plow Center in Atlanta in 1997. This was organised through Fulton County Arts Council, Leadership Atlanta and 100 Black Men. Woolf was the Project manager of South African Art to Atlanta, Common and Uncommon Ground for the 1996 Cultural Olympiad.

Also on show at the Mandela @ 90 exhibition was a carved wooden maquette entitled Witness: Shadow of Ubuntu. It is a composite of eleven outdoor sculptures which, when completed, will span more than thirty meters across with a general height of 3meters. The Witnesses cast shadows which collectively read “UBUNTU” throughout the year, every day, at a specific time. Madiba’s outreach encompassing all the peoples of South Africa is a profound and living example of the true meaning of Ubuntu.

Woolf was honoured by the ‘Ampersand Foundation’ and received a Fellowship to study in New York. She has had numerous other exhibitions in galleries and museums in South Africa and abroad and has artwork in major corporate and private collections.

In 2012 Woolf exhibited work on Taxi Hand Signs at the MOMA in New York in the exhibition 'Talk to Me'.

She received her PhD in Anthropology and Art, which documented and expanded on the hitherto unexplored subject of South African Taxi Hand Signs, in 2014. With her doctorate, Woolf has added an entirely new body of knowledge to the world, some of which you can explore through Taxi Hand Signs.

ada enup has made a name for itself as a publisher that takes on specialised subjects and prints ‘firsts’. We printed the first book on Taxi Hand Signs in this country. We managed the first Microsoft ITA textbook in the world. We sourced, initiated and published the very first book on the South African music industry – The South African Music Business . We proudly printed the NEA anthology, the first SA poetry collection that is graded for all grades as well as style-classified in all 11 official South African languages. Other ‘firsts’ are currently underway.ada enup stands for "a daring adventure to enchant and uplift" and that is what we strive to do with authors every step of the way.

ada enup cc has chosen to review this offer before it proceeds.