Saint and the Atheist

It is hard to think of two philosophers less alike than St. Thomas Aquinas and Jean-Paul Sartre. The former was a thirteenth-century Dominican friar known for reconciling the teachings of the Catholic Church with Aristotelianism. The latter was a twentieth-century intellectual known as the central figure in the literary-philosophical movement known as existentialism. The former was a firm believer; the latter was a notorious atheist. And yet, in The Saint and the Atheist, philosopher Joseph Catalano shows that a conversation between the two, bringing them closer to reveal similarities and bring out the real import of their differences, is fruitful for thinking through some of the central questions about faith, conscience, freedom, and the meaning of life. Written in an accessible style that presupposes no previous philosophical experience, Catalano’s book offers a compelling and profound point of entry to two of history’s most important and influential thinkers and what they can still offer to us in the present. 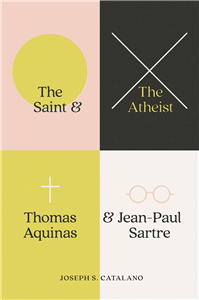 Joseph S. Catalano is professor emeritus of philosophy at Kean University in New Jersey and the author of several books, most recently, Reading Sartre: An Invitation. He lives in Manhattan, New York.