Ripperology—a sometimes obsessive interest in studying the crimes of Jack the Ripper—is a subject of timeless interest that has suffered from confusion, exaggeration, and hyperbole for over a century. Jack the Ripper was probably the first serial killer to appear in a large metropolis at a time when the general populace was literate and the press was a force for social change. The press was also partly responsible for creating many myths surrounding the Ripper.

Robin Odell’s Ripperology is the first study to present a sequential history of literary investigations of Jack the Ripper’s crimes and to address the seven principal phases of Ripper speculations: the initial wave of journalism that followed the 1888 murders; the “revelations” of highers-up in Scotland Yard who pretended to know more than they actually did; the period between 1925 and 1949 when sensational and factually shaky book-length “solutions” were proposed, including the theories that Jack avenged his son’s syphilis or was a female midwife in disguise; the dawn of more responsible study, between 1950 and 1975, in which the author himself played an important role; better documented studies spurred by the opening of Scotland Yard files in 1976; the explosion of new Ripper hypotheses in the 1990s; and current theories, including Patricia Cornwell’s DNA-based accusation of artist Walter Sickert.

Ripperology does not attempt to give a detailed, encyclopedic account of the murders. Rather, its aim is to tell the story of the extraordinary literary efforts directed at solving the mystery. While there are no formal conclusions, and this book does not seek to saturate the reader with minutiae, exaggerated claims are debunked and misconceived ideas are dispelled. Author Odell, having studied these unsolved serial killings for four decades, guides the reader in his easy narrative rich with documentation. Ripperology will be welcomed by true crime aficionados. 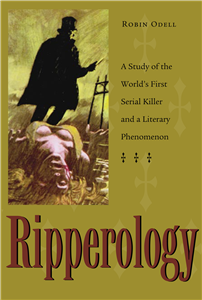