After his stand-out adaptation of David Vann’s novel Sukkwan Island and his first personal album, Paiement Accepté, Ugo Bienvenu – a well-rounded author and big name on the animation scene – continues his exploration of the future.

In 2055, there’s so much data that it can’t all be saved. The “Prophets” are therefore tasked with determining which data will be saved and which archives will be served an “elimination visa” and subsequently destroyed. Yves, a humanist archivist at the Essentials Bureau, can’t bring himself to follow through. To save them from oblivion, he decides to commit a serious violation and secretly saves some of the more cultural data in the memory of Mikki, his personal robot at home. Advances in artificial intelligence have enabled humans to entrust third-party gestation (TPG) to machines and Mikki, who is a hermaphroditic robot, is also carrying the child of Yves and his wife Emy.

Meanwhile at the Essentials Bureau, leaks have been detected and a massive investigation is launched among the personnel. Yves feels threatened and decides to run away with Emy, Mikki, and their unborn child to a deserted country house in the middle of nowhere. On the way, however, the authorities track him down and take control of the vehicle. Only Mikki manages to get out with his precious cargo. The accident triggers labor and a little girl is born just feet away from the burning car as flames devour her biological parents’ bodies.

A frantic flight through the wilderness ensues and the robot manages to reach the old house with the baby. Hidden away from the rest of the world, Mikki takes it upon himself to share all of the fragments of knowledge saved in his memory with the little girl, whom he names Isi. Will he manage to turn his pupil into a fully-fledged human before the all-powerful authorities locate them and the inevitable happens? 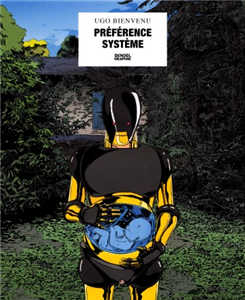 Editions Denoël has chosen to review this offer before it proceeds.