A Journey to Santiago De Compostela

Since the Tenth Century pilgrims have travelled the ancient roads through France and Spain that lead to the fabled town of Santiago de Compostela, the legendary shrine of St James the apostle. Travelling in groups for safety they braved the marauding Moorish armies, raging torrents and fearsome mountain passes, trusting in the protection afforded them by the emblem of St. James, a scallop shell.

A thousand years later, Bettina Selby tackled the pilgrim’s trail alone and on a bicycle, finding the scallop shell still a powerful talisman, opening doors and providing shelter. This is the story of her journey through countries whose twentieth-century veneer barely conceals a wealth of history, from the magnificent architecture of the great cathedrals of the Middle Ages to the tiny hamlets that seem untouched by the present day, and the awe-inspiring and dangerous beauty of the Pyrenees.

Like her predecessors, Bettina Selby had to deal with the natural hazards of the terrain, thieves and wild dogs, but she also encountered a host of fascinating characters along the route. Above all she found a vibrant tradition that lures more and more people to become pilgrims on the road to the ‘Field of the Star’

A real adventurer - brave, good humoured, modest and patient.   She is also compassionate. 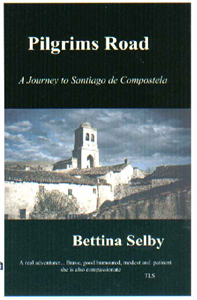 Mountain House Publishing has chosen to review this offer before it proceeds.