Art as a Form of Thinking

Grootenboer is interested in art as philosophy-that is, -art as a consideration of thinking. She insists that early modern art can be viewed through the lenses of contemporary interest and means. She argues that art is capable of articulating thoughts and shaping concepts in visual terms, and thus directly engages with the development of philosophical ideas. In particular, she explores the ways seventeenth-century paintings, in the wake of the Reformation and the rise of humanism, became sites of speculation about the possibilities and limitations of thinking as such. She focuses not on how thought is expressed in pictorial statements but on what remains unspoken in painting, implicit, and inexpressible—a quality that she calls pensiveness. Different from the self-aware images propounded by W.J.T. Mitchell, which seem in control of the interpretations they elicit, pensive images are speculative, pointing beyond mere interpretation. As an alternative pictorial category, akin to narrative or allegorical painting, pensive images can articulate the complexities of philosophical ideas, and thus gain new relevance in more recent debates on the nature of the image in visual culture. 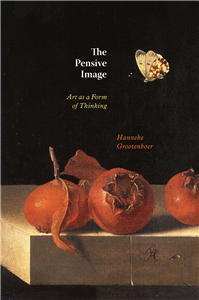 Hanneke Grootenboer professor of the history of art at Oxford University. She is the author of The Rhetoric of Perspective: Realism and Illusionism in Seventeenth-Century Dutch Still-Life Painting and Treasuring the Gaze: Intimate Vision in Late Eighteenth-Century Eye Miniatures. Her work has been published in Art Bulletin, Oxford Art Journal, Art History, and numerous other outlets.