Actor Graham Cole pounded the beat in ITV1 police drama The Bill for more than two decades and won plaudits for his carefully crafted portrayal of dependable PC Tony Stamp, the television cop most like the real thing.

While on screen Tony Stamp became a Sun Hill stalwart and the sort of old-fashioned policeman you would want on your side, off-screen Graham worked tirelessly with the real police to make sure he's kept up to date with frontline officers.

Graham worked in the NHS as a porter before starting his acting career doing summer seasons and working in holiday camps. His television break came as an extra playing monsters in Doctor Who and appearing in episodes of shows such as Only Fools and Horses and Secret Army.

Later his skill at stage fighting landed him work as an extra in The Bill and it wasn't long before he was given a full-time job as area car driver and all round good guy Tony Stamp.

Now, in a witty and candid memoir, he reveals just what it was like to star in one of television's most enduring series, the key events he's seen during his time on the show and how he really felt about leaving after 25 years.

On The Beat is the entertaining autobiography of a likeable star who reveals the inside story behind the scenes of Britain's favourite police drama and the ups and downs of an actor's life. 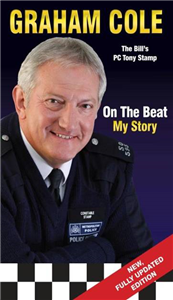 Great potential for this title in Australia and New Zealand etc

Graham Cole was born in 1952 and grew up in Harlow, Essex.

He's been an actor since the age of 22 and is best known as PC Tony Stamp in The Bill.

He is a member of the showbusiness charity The Grand Order of Water Rats and he is a celebrity ambassador for ChildLine.

He and his wife Cherry, who have a son and a daughter, live in Kent.

Splendid Books Limited has chosen to review this offer before it proceeds.