Murder in Honolulu is an island mystery novel set in Hawaii and the first book in a bestselling crime series.

Skye Delaney is a private investigator, security consultant, and ex-cop who lives in Waikiki. When her ex-husband and former prosecutor turned businessman, Carter Delaney, asks her to find out if his new wife Darlene is having an affair, Skye reluctantly agrees to take the case. Little does she know that it will turn out to be far more than infidelity.

Skye confirms that Darlene is not only having an affair but also doing drugs. But before Skye can tell this to Carter, she finds him dead in her Jacuzzi bathtub with an apparent suicide note stuffed in his mouth.

Did he really take his own life with so much to live for? Or was Carter murdered?

The one thing she knows for sure is that her German Shepherd Ollie bit an intruder who happened to have AB negative blood. As did Carter. Coincidence?

Skye’s current love interest is Ridge Larsen, a homicide detective for the Honolulu Police Department, who also happens to be assigned to this case once it becomes official that Carter Delaney was murdered.

As Skye continues to get deeper and deeper into the investigation of Carter’s death, it becomes apparent to her that it her ex had many secrets and just as many enemies, making him a marked man. These included working for the Honolulu Prosecuting Attorney as a consultant on a case involving a crime syndicate, being a gambling addict, and being in debt to a loan shark.

While the bodies continue to pile up, Skye puts her neck on the line to find out the truth and nail a ruthless killer who has targeted her for death; even as she tries to maintain her professional objectivity and balance it with her private and romantic life.

"Infidelity and murder in paradise lead to a one of a kind case for PI Skye McKenzie Delaney, and an enjoyable ride for the reader.... A story that will grip you to the end." -- John Lutz Edgar Award winner and bestselling mystery author 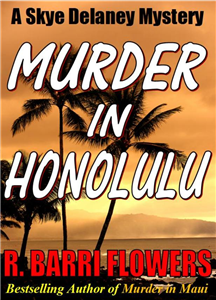 "Murder in Honolulu is an exquisitely rich and masterfully constructed mystery . R. Barri Flowers now lays fitting claim to the beautiful island paradise as his territory, owning it in the same way Robert Parker owns Boston and Lawrence Block New York. The difference here is how adroitly Flowers adds blood and murder to the shadows cast by the swaying palm trees beneath which ugliness lurks in the least expected places. A savvy, smooth, and sumptuous read that's as hot as Waikiki beach sand." --Jon Land, bestselling thriller author

"Murder in Maui by R. Barri Flowers is a masterful thriller set in the dark underbelly of Maui, with lots of fine action, down and dirty characters, and the vivid details of police procedure one would expect from an author who is also a top criminologist. This is a gripping novel in what promises to be a outstanding series, featuring a truly unforgettable detective in the character of Leila Kahana. A terrific read!" -- Douglas Preston, Co-creator of the Bestselling Pendergast series of novels.

"Murder in Maui is a gripping and tightly woven tale you won't want to put down. Author Flowers neatly contrasts the natural beauty of a tropical paradise with the ugliness of murder and its aftermath. Treat yourself to a vacation in Hawaii. You'll want to return again and again." -- John Lutz, Edgar Winner and bestselling mystery author

Murder in Maui, R. Barri Flowers' debut Leila Kahana mystery, is even hotter than its exotic Hawaiian setting. This is a police procedure of the highest order, mixing equal parts Sue Grafton and Jeffrey Deaver with a sprinkling of Patricia Cornwell at her best Sure to make both Kahana and Flowers household names, MURDER IN MAUI is Hawaii 5-0 sharpened to a dark edge beneath the brilliant sunshine." -- Jon Land, bestselling crime writer

“An A+ suspense/mystery with a touch of heartfelt romance.... Is not just simply compelling, it also activates reader’s consciousness.... Powerful legal suspense is riveting.”--Fresh Fiction on State’s Evidence

“Justice Served is a model of crime fiction .... Flowers may be a new voice in modern mystery writing, but he is already one of its best voices.”--Statesman Journal

"Infidelity and murder in paradise lead to a one of a kind case for PI Skye McKenzie Delaney, and an enjoyable ride for the reader.... A story that will grip you to the end." -- John Lutz Edgar Award winner and bestselling mystery author

"Go ahead. Take a trip to Hawaii. MURDER IN HONOLULU is your ticket. As long you don't mind a surprise around every corner, Skye Delaney will be your streetwise guide." -- Camille Kimball, true crime author