Economic Growth and Its Critics

Why do we believe what we do about the concept of “economic growth”? Why has growth traditionally been measured by economic activity rather than by social factors like the well-being of the worst off in a given society? Seemingly arcane choices like these had implications not merely in the twentieth-century West but in the colonial and postcolonial states where economists and others prescribed this prevailing standard of economic success, usually with appalling results. Stephen J. Macekura here investigates how the conventional discourse around growth took shape and how it gained worldwide cultural and political power. His transnational history examines how key intellectuals, policymakers, and activists conceptualized, pursued, and often resisted prevailing notions of economic development. Reformers criticized persistent flaws in the growth discourse, the misplaced faith in economic growth as a panacea for social and political ills, and the reliance on economic indicators as representations of the world’s complexities. Macekura’s cast is vibrant and large, and his story covers the sweeping geography of the cold war and more. By historicizing the terms and concepts that underwrite today’s increasingly inequitable conditions, Macekura opens the door to pursuing more socially aware policies in the future. 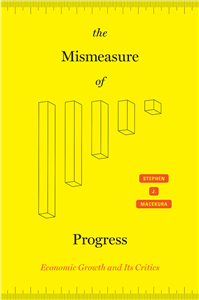