The essence of ‘Home Ground’ is a collection of twenty walks, ranging from about five to fifteen miles in length, situated in the North West of England. The criterion for selection is that each walk must be situated in whole or in part on Ordnance Survey 1:50,000 ‘Landranger’ map no. 103 (Blackburn and Burnley). This was the map used by the author when he first began to explore the area almost fifty years ago, and these long personal associations, heightened by a long absence from the area, make this truly his home ground. Within this relatively small area there is a rich variety of beautiful scenery, largely unsung, all lying within some twenty miles of industrial East Lancashire. From the suburbs of Blackburn to the fringe of the Yorkshire Dales, from the sweeping fells of the Forest of Bowland to the wooded valleys and heights of Calderdale, these walks have something to offer to walkers of practically all tastes. Both the Forest of Bowland and the Pennine Way feature strongly on the map and in the book, and extra sections discuss these features. Especially the Forest of Bowland, recognized as an area of outstanding national beauty but not a national park, is introduced in some detail as its charm and many opportunities for the walker and day visitor are still little known. The Pennine Way, which features in three of the walks, is mentioned more autobiographically as the author recalls his own experience of the Way and its wider relationship to Northern England. About the Author Andrew Stachulski was born in Blackburn in 1950, the son of a Polish father and English mother, and grew up in nearby Great Harwood. He was educated at Accrington Grammar School from 1961 to 1968, when he gained entrance to read Natural Sciences at Fitzwilliam College, Cambridge. He graduated with firstclass honours in 1971 and, after winning a senior scholarship, he remained at the college to study for a Ph. D. under the supervision of Professor Alan (now Sir Alan) Battersby. Following the completion of his doctorate in 1974, he held postdoctoral fellowships with the Medical Research Council and at Jesus College, Oxford until 1978. There followed a long period of employment in the chemical industry, first with Beecham Pharmaceuticals (later SmithKline Beecham) and then Ultrafine Chemicals, Manchester. In 2001 he fulfilled a longheld ambition by returning to academic life at the University of Liverpool, becoming a senior lecturer in 2003. Recently (Jan., 2010) he moved to take up a senior research fellowship at the University of Oxford. Walking has always been a great love of his life, beginning in the Ribble Valley and Pendle country of his native Lancashire. In the mid 1970s he completed a number of Britain’s longdistance footpaths, the Pennine Way, Offa’s Dyke Path and Coast to Coast walk, accompanied by college friends. Subsequently he climbed all the principal fells of the Lake District, where he often returns, and from 1981 again with a college friend he began to climb in the Scottish Highlands. In 2003 he completed the circuit of all the ‘Munros’, the separate Scottish mountains of 3,000 ft. or greater height. His first walks were planned with the aid of the old one inch to one mile Ordnance Survey map of Blackburn and Burnley, and that is truly his home ground. It was particularly following his return to the North in 1991, then living in Greater Manchester, that this book came to be planned. Old walks familiar from childhood, in the Ribble and Hodder valleys, Pendle country, South Pennines and the Forest of Bowland were revisited and built on, and many new ones were added. From these the twenty walks featured in this book have been selected, walks which appeal personally to the author through their beauty or special associations, or which in his view speak most clearly of the characteristics of the area. 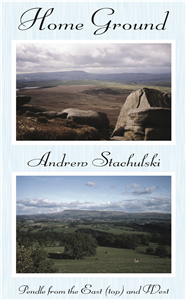