Now in this witty and revealing memoir, Derek tells of his extraordinary journey from growing up in the real East End of London during the Blitz to taking up residency in Albert Square.

Derek's journey to Albert Square has proved to be an eventful one. A bone fide East Ender, born within the sound of Bow Bells, Derek grew up during the Blitz in a tight-knit, working-class family.

In this candid memoir he describes those tough early days, his stint in the police, life on the wrong side of the law and how he turned his dream of being an actor into a reality. But not before trying his hand as a professional gambler and acting as a runner for the notorious East End gangster Charlie Kray, brother of twins Ronnie and Reggie.

Determined to be an actor, Derek began his hugely successful stage and screen career firstly as a stuntman; before landing memorable TV roles in series such as Law and Order, Minder, King and Castle, The Governor and doomed soap Eldorado.

In this frank and revealing tale, Derek pulls no punches as he admits past mistakes and describes his remarkable transformation into one of our best loved actors.

Meet the man behind the character as he shares with readers his heartbreak over two marriage break ups and his devotion to his twin boys. An East End Life is a truly remarkable story spanning nearly seven decades, packed with tears and laughter that will endear you to this popular star. 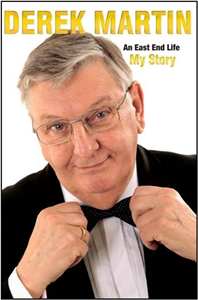 Splendid Books Limited has chosen to review this offer before it proceeds.