Two dudes walk into a bookstore…

Tristan knows he’s got issues. His latest ex-girlfriend knows it too. He can’t blame her for dumping him—even though she gets her brother to do it for her. Since he can’t stop staring at said brother’s package, he figures it’s about time to put a label on those issues. He likes guys.

He heads to a local bookstore with what he’s sure is a foolproof plan to find someone to show him what he’s been missing. But who should crash his little adventure? Officer Michael Truax, who gave him a really expensive ticket back in high school for skateboarding without a helmet.

Michael has been trying to catch Tristan for years...to give him a second ticket. Suddenly faced with “Sparky”, all grown up and looking to get laid, Michael’s protective instinct kicks in—and presents him with an opportunity that’s hard to resist. After all, the kid must know what he’s getting into, so why not?

This book has been previously published. 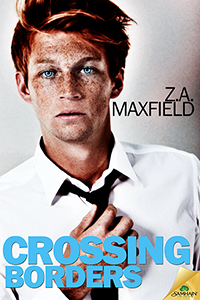 Samhain Publishing has chosen to review this offer before it proceeds.