In Search of the Stories That Define Canada

In Dancing Through History, Henry crosses Canada's vast physical and ethnic terrain to uncover how its various cultures have evolved through their dances.

Her coast-to-coast journey takes her to Haida Gwaii in British Columbia, where she witnesses the seldom seen animist dances of the islands' First Nation people. In the Arctic, Henry partakes in Inuit drum dancing, kept alive by a new generation of Nunavut youth. And in CapeBreton, she uncovers the ancient "step dance" of the once culturally oppressed Gaels of Nova Scotia.

During her travels, Henry discovers that dance helps to break down barriers and encourage cooperation between people with a history of injustice. Dance, she finds, can provide key insight into what people value most as a culture, which is often more similar than it seems. It is this kind of understanding that goes beyond our divisive histories and gives us compassion for one another.

Unique to this book, Dancing Through History includes first person interviews with First Nations, Métis, and Inuit (Canada's Aboriginal groups) talking about their traditions and the effect colonisation has had on them, all through the lens of dance. Their voices are given ample space to speak for themselves – what is revealed is a beautiful worldview and many lessons to be learned in order to have a healthy planet and tolerant people as we move into the future.

Book Details: This is an adult non-fiction book of Canadian content. The target market is curious travellers and those interested in culture beyond the typical tourist traps. Sales have ranged from junior high schools to retired baby boomers. Interested publishers can make an offer directly on the profile page to buy available rights. 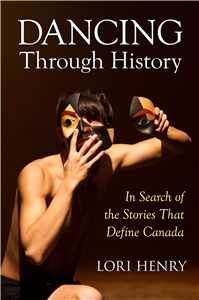 All rights are available worldwide for this title. The author is especially interested in selling non-North American and foreign language rights (print and digital), as well as audio rights worldwide.

This title has been marketed throughout Canada via online and print media, and radio channels.

"As its title indicates, Dancing Through History looks at how past events have shaped the traditional dances of the country's immigrant and aboriginal groups. In fact, the book reads less like a travelogue than a study of how Canada's diverse communities-in particular First Nations groups-have struggled to retain their cultures in the face of political challenges." - Carolyn Ali, Travel Editor at The Georgia Straight

"If you're a dance lover, Dancing Through History is definitely worth taking a look at. It will teach you more about something you love, but it will also remind you that dance is universal. It crosses boundaries, cultures and ages, and has a way of binding people together in a way that almost nothing else can." - INDUSTRY Dance Magazine

"Dancing Through History is a strong pick for travel and culture collections, highly recommended." - The Midwest Book Review

Lori Henry is a Writer and Anthropologist of Dance based in North Vancouver, Canada. She began dancing since she was two years old, first learning dances from the Polynesian islands (Hawai'i, New Zealand, Samoa, Tonga and the Cook Islands, as well as Fiji) and then studied ballet, tap, jazz, modern, hip hop and contemporary styles.

Dancing Through History was researched over 4 years while Lori was working as a freelance travel writer. She would add on time to trips within Canada in order to research the book on almost no budget. The book has sold over 1,000 copies in Canada for an adult readership and has been used in junior and high school classrooms as a learning tool about Canada's history, as well as a writing tool in English classes.