West of the Cuyahoga

A narrative history of Cleveland's West Side

“In the beginning, two settlements straddled the Cuyahoga River at its northernmost reach, where it twists its way into Lake Erie. The older and larger of the two, Cleveland, was on the east bank. The younger community on the west bank was called Brooklyn Township, later to be known as the City of Ohio or, familiarly, Ohio City, and, ultimately, the West Side. The twain faced each other as rival entities for many years, divided not only by the waters of the river but by political, historical, and economic differences as well.” —from West of the Cuyahoga

Longtime columnist for the Cleveland Plain Dealer, George E. Condon turns his keen reportorial eye to Cleveland’s West Side, an area rich in history but too often overlooked in scholarly texts. In easy, polished prose, Condon regales the reader with stories of settlement, migration, and development, all the while bringing to life such characters as “Ice Wagon” Kilbane, whose legendary punch laid many West Side Irishmen low, and “Six O’Clock” Dorsey, said to have been the skinniest kid in the Old Angle neighborhood, and “Needles” McCafferty, who took his dinkey trolley sightseeing one memorable night.

This seasoned newspaperman has been soaking up stray facts and vanishing information for more than five decades. Condon’s voracious appetite for facts and a nose for where to find them bring alive this Cleveland history, engaging the reader with his authentic stories, humorous anecdotes, and fond perspective.

West of the Cuyahoga fills a gap in the history of Cleveland, Ohio, and reveals the gleanings of a lifetime for a local journalist and raconteur. 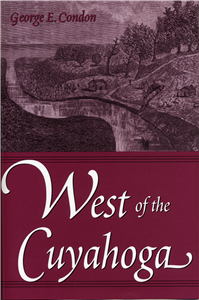