Tim Wessurp, nicknamed Twerp, is a thirteen-year-old who suddenly discovers he is blessed with the gift of ubiquity, and as a result finds himself involved in a series of strange and at moments hair-raising adventures.

The first is with the Smokeys, devilish wisps of smoke bent on dominating mankind, that Twerp manages to outwit with the help of his science teacher and ne of the world's leading ecologists.

The second is with Rag Dolls, and specifically with an infernal one named Mourag, when he goes to stay with his aunt Gwen in Conneticut. It causes such havoc before it is eliminated that it almost brings our Western civilization to its knees.

The third is with the Nethites, totally flat alineds from a planet stuck in a black hole, that want our scientists' help get out of it and recover their lost dimension.

Involved in these adventures is a ruthless businessman, a wealthy American couple, Cabinet Ministers, a hoard of SCH's (read the first episode to discover about them!), astrophysicists and even a Nobel Prize winner.

Twerp's following adventures take place in Egypt, in the Great Pyramid of Gizeh, as well as at Stonehenge and in a mansion in Italy. Involved in these latest adventures are the gods of Ancient Egypt, Merlin the Wizard, the Knights of Templar and the Presidents of the USA, amongst other familiar characters. 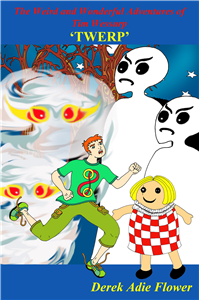