Memoirs of a Defiant Old Woman

This is the story of a life lived to the full. Hanna Braun was born in 1927 to a Jewish family living in Germany. The family immigrated to Palestine in 1937, shortly after Hitler came to power in Germany and the onset of Jewish persecution there. During this course of events she was separated from her beloved father, who was forced to flee the country and made for Switzerland to escape the Gestapo. Her grandmother later died in the Terezin ghetto. Once in Palestine, Hanna's uncle became a fierce Zionist, and would convert Hanna's mother to Zionism as well. Hanna - a teenager at the time - also turned to Zionism, although she was initially unaware of what exactly this meant. Over the years, Hanna made many Arab friends in Palestine, and gradually began to question her allegiances. She witnessed the formation of the state of Israel, and was there when the atrocities of Deir Yassin happened; an incident that made her hate Zionism forever. These events, and many others explored in Weeds Don't Perish, helped to shape Hanna's perception, and transformed her into an active human rights activist; unable to witness injustice without speaking out. The book is often controversial and Hanna, not being endowed with the gift of great diplomacy, makes many enemies as well as friends along the way. Throughout, Hanna manages to retain her zest for life and her sense of humour, and delights in describing her years teaching English and Dance to her students in Zimbabwe. Her curiosity and enthusiasm for meeting new people and experiencing new things is infectious, and the reader cannot help but be swept up in the story. Hanna endured many setbacks and painful experiences in her personal life but, like the proverbial weed, she never gave up and refused to be beaten. Instead, she continued to her final days fight passionately for causes close to her heart - human rights and equality for all. 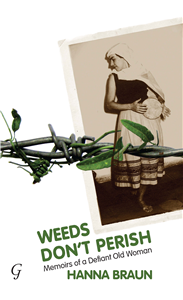 Garnet Publishing has chosen to review this offer before it proceeds.