We Shall Independent Be

As these essays attest, Black self-determination was central to the methods African Americans employed in their quest to establish a sense of permanence and place in the United States. Contributors define space to include physical, social, and intellectual sites throughout the Northern and Southern regions of the United States, ranging from urban milieus to the suburbs and even to swamps and forests.

Ultimately, "We Shall Independent Be" recovers the voices of African American men and women from the antebellum United States through the present and chronicles their quest to assert their right to a place in American society. By identifying, examining, and telling the stories of contested sites, this volume demonstrates the power of African American self-definition and agency in the process of staking a physical and ideological claim to public space. 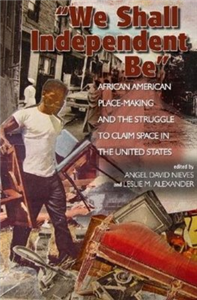