The third instalment — A Victorian private detective, Veronica Britton specialises in tricky situations that occur in time as well as space. Working alongside her young apprentice, the brilliant time-sensitive Gabrielle Pendleton, she’s very much in demand. If a necklace goes missing and you suspect that someone is selling it off in the future as a valuable antique, or you find yourself being blackmailed by someone who knows a little too much about your past, she’s your woman. Smart, efficient and (almost) always discreet, Veronica is the best chronic detective in London.
Time travel is an open secret in the city; it operates under the supervision of the Ministry, an obscure branch of the British government that has taken a sudden interest in Veronica. She’s never liked them very much and done her best to avoid them. But somehow they have recently developed a habit of cropping up wherever and whenever she finds herself.
Navigating the timepools – corridors that join the various time zones of London – Veronica uncovers a series of mysteries that are all strangely interconnected. She soon finds out she has stumbled on a fiendish plot hatched by a powerful enemy – one that threatens not just the city she loves, but the whole world. Only by facing up to the secrets of her past can Veronica Britton save the future. 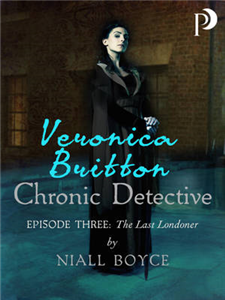 Salt Publishing has chosen to review this offer before it proceeds.