“Watership Down” with armadillos

For decades, the southern states of the Unitied States have witnessed the relentless migration of vagabonds from Mexico. They are now found as far north as the Ozarks of southern Missouri. No one knows why they keep traveling north, ever northward. Until now.

In the tradition of Charlotte’s Web or The Underneath comes the American fantasy, VAGABONDS, the saga of El Garro’s armadillo colony, the scouts and pioneers who have always been at the forefront of the migration. Rumors from their original homeland, the jungles far to the south, indicate that El Garro’s colony may be nearing the fabled Faralone Falls, where they will find the answer to why they have traveled northward for decades. Galen must leave the comfort of his den and lead the search party. Accompanying him are Tex, a representative of the southern clans, Corrie, who is El Garro’s daughter, and Blaze, the barn owl. Galen’s quest for answers plays out against the background of the armadillo colony who has never before challenged their nomadic way of life.

VAGABONDS is an American fantasy set in the Ozark mountains. Like El Garro’s clan, we are a nation of immigrants, people who have known the sacrifice of leaving everything behind to find a future and a hope for their families.

As a long-time reader and fan of fantasy stories, author Darcy Pattison is often frustrated by the lack of truly American fantasies. This story of vagabond armadillos traveling up from South America is embued with her fascination with the Ozark Mountains, especially the Buffalo National River area, the first river in the U.S. to be named a National River. She has hiked, camped and floated the Buffalo for years and brings this setting to life in this story.

Published in eight languages, her middle grade novels include: Saucy and Bubba: A Hansel and Gretel Tale; The Girl, the Gypsy and the Gargoyle; and Vagabond. Recent nature books for children include: Abayomi, the Brazilian Puma: The True Story of an Orphaned Cub; Wisdom, the Midway Albatross, a Starred Review in Publisher’s Weekly; Desert Baths (Arbordale), an NSTA Outstanding Science Trade Book 2013; and, Prairie Storms (Arbordale). Her series, The ALIEN, INC. CHAPTER BOOK SERIES includes Kell, the Alien; Kell and the Horse Apple Parade; Kell and the Giants; and Kell and the Detectives. For more, see darcypattison.com/about 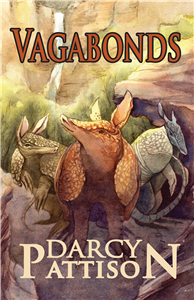 Available in paperback, hardcover, ebook and formats in English.

Mims House has chosen to review this offer before it proceeds.