This intriguing book, published incollaboration with the Historic Houses Association, brings together objects that are of special significance to the people who live and have lived in Britain’s country houses. Some are quite humble, of no value away from where they are kept and special in their own way; others are objects of extreme rarity and historical importance. They are treasured possessions, giving a glimpse of the people, their characters and tastes and interests, to whom they belonged. Each one has a connection to an individual or a family. Each one has a story to be told.  They come from historic houses all over Britain that are open to visitors and whose owners are members of the Historic Houses Association. They range from Tipoo Sahib’s hat at Belmont to the parrot (now stuffed) given by Disraeli to Lady Bradford at Weston Park. They include pieces of jewellery, letters, sporting paraphernalia, old black and white photographs, and children’s toys and fancy dress. Among the houses with connections to famous people are Stratfield Saye, Hampshire, bought for the Duke of Wellington by a grateful nation, and Deene Park, Northamptonshire, home of the Earl of Cardigan of the Charge of the Light Brigade. Other houses include: Abbotsford, Roxburghshire, built by the writer Sir Walter Scott; Alnwick Castle, Northumberland, seat of the dukes of Northumberland; Blenheim Palace, Oxfordshire, memorabilia from the Duke of Marlborough and Sir Winston Churchill; Bowood House, Wiltshire, where Joseph Priestley discovered oxygen; Burghley House, Lincolnshire, built for William Cecil, Lord High Treasurer to Queen Elizabeth I; Capesthorne Hall, Cheshire, items associated with boxing and acting; Dalmeny House, South Queensferry, with its collection of Napoleonic items; Dorney Court, home for generations of the Palmer family; Kelmscott Manor, Oxfordshire, home of William Morris; Lennoxlove, East Lothian, with connections to Mary, Queen of Scots, and an important event in World War II. 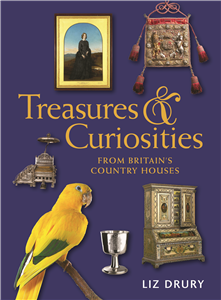 Elizabeth Drury, an art historian with a special interest in social history, has been involved in publishing for many years. She has worked for English Heritage and has edited among other books Cliveden: The Place and the People and The Royal Hospital Chelsea. She wrote The Butler’s Pantry Book and Self Portraits of the World’s Greatest Painters and co-authored Forgotten London, The Victorian Garden Album and The Victorian Household Album. For the National Trust she co-authored several books, most recently Country House Life: A Century in Photographs.

Pimpernel Press has chosen to review this offer before it proceeds.