Thomas Erskine and Trial by Jury

Thomas Erskine (1750-1823) was one of the greatest advocates ever to appear in an English court of Law. As King’s Counsel he was involved in many celebrated trials, including the prosecution of John Horne Took for seditious libel and of Queen Caroline for adultery. His other notable achievements include the successful defence of Thomas Paine’s Rights of Man, which cost him the post of Attorney-General to the Prince of Wales. Erskine also served as Member of Parliament for Portsmouth and for just one year as Lord Chancellor. Latterly the First Baron Erskine, this book covers his controversial career and rise to high office. An ideal companion to Sir William Garrow (Waterside Press 2010). Reviews 'This commendable study by John Hostettler deserves a wide readership as the Scots may still reasonably take pride in the achievements of Lord Erskine of Restormel Castle (in the Fowey Valley, Cornwall) and English Lawyers may understandably recall with respect his marked abilities amongst other great Lawyers of the era': SCOLAG 'Almost 200 years after Thomas Erskine's death most barristers and solicitor advocates still aspire to his legendary oratorical and forensic skills. Those who are not familiar with the man would be well advised to read this biography without delay': Law Society Gazette 'This work is of more than historical interest. It shows how the advocate can affect the Law, and by doing so, the constitution': Counsel 'Thomas Erskine was one of the bar's greatest names. Few however know this extraordinary story of the man who traced his way from poverty through the navy all the way to the bar and Parliament to the House of Lords and the Woolsack. John Hostettler's biography explores this astonishing man and his even more astonishing life': Litigation 'With eloquent invective Erskine mesmerized juries': Justice of the Peace Author John Hostettler is one of the 1st’s leading legal biographers. He was a practising solicitor in London for thirty-five years as well as undertaking political and civil liberties cases in Nigeria, Germany and Aden An ideal companion to Sir William Garrow (Waterside Press 2010). 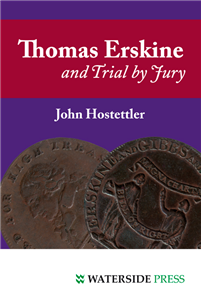