Research and research methods are extremely important tools in academic scholarship. At the core of every research method lies the hypothesis. Theory Building for Hypothesis Specification in Organizational Studies focuses on developing a cogent theory that leads to the specification of a hypothesis that can be taken up for subsequent empirical examination.

The key areas covered in the book are:

" theory in the context of reality, knowledge, science and research

" role of theory in research

" process and practice of theory building

" observations and examples from published research

The uniqueness of the book lies in its focus on theory building for the specific purpose of hypothesis creation rather than for propounding any grand idea or concept. It is enhanced with insightful texts and citations of thinkers and researchers of international repute.

The book will serve as essential reading material for research methods courses in research programmes. It will be useful for researchers working in the areas of organizational behaviour, human resource management, organization theory, strategy and policy and marketing. 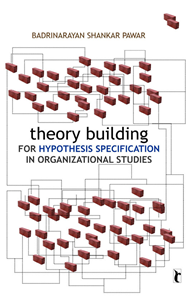