Ever since Aristotle's Poetics, both the theory and the practice of theater have been governed by the assumption that it is a form of representation dominated by what Aristotle calls the muthos, or the "plot." This conception of theater has subordinated characteristics related to the theatrical medium, such as the process and place of staging, to the demands of a unified narrative. This readable, thought-provoking, and multidisciplinary study explores theatrical writings that question this aesthetical-generic conception and seek instead to work with the medium of theatricality itself. Beginning with Plato, Samuel Weber tracks the uneasy relationships among theater, ethics, and philosophy through Aristotle, the major Greek tragedians, Shakespeare, Kierkegaard, Kafka, Freud, Benjamin, Artaud, and many others who develop alternatives to dominant narrative-aesthetic assumptions about the theatrical medium. His readings also interrogate the relation of theatricality to the introduction of electronic media.;The result is to show that, far from breaking with the characteristics of live staged performance, the new media intensify ambivalences about place and identity already at work in theater since the Greeks. 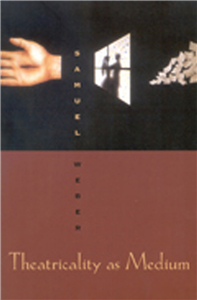