The Way it Was

George (“Barney”) Crile considers himself a lucky man, lucky to be born when and where he was, lucky to have had the parents he did, lucky in his career, and most of all, lucky in his wives. Barney Crile’s parents were of Cleveland’s elite during that city’s self-described golden age. His father was a founder of the world-famous Cleveland Clinic and a pillar of the medical community. His mother took care of the family and in particular doted on Barney. She kept volumes of letters, photographs, and memorabilia from which her son wrote this fascinating memoir.

The early chapters give insights into a social class, football and parties at Yale, medical training at Harvard and the Mayo Clinic, and the beginnings of a distinguished medical career. With his first wife, Jane Halle, Barney Crile also became an accomplished archaeologist, scuba diver, and author. After Jane’s death he met Helga Sandburg (youngest daughter of the famous American poet), who became wife, companion, and partner in further adventures in travel and letters. But Barney Crile was and is much more than the prince of a famous family. He is the author of several books and 462 scientific papers, an Honorary Member of the Royal College of Surgeons, and known for his advocacy of conservative approaches to surgery, especially breast cancer. The last caused him some problems with other surgeons, but in this case, as in others, he was in advance of the guild. 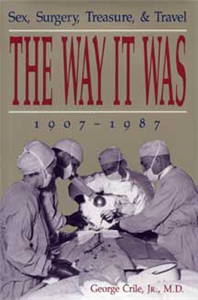