With his life literally hanging from a slender rope over a crevasse near the top of a Himalayan mountain, a young man relives in his mind a relentless two-year physical and spiritual test as a Peace Corps volunteer in a remote mountain village of Nepal._x000D_ Combining the elements of adventure story, travel log, and personal confession, this absorbing account describes a wrenching experience that belies the idealistic expectations of many Peace Corps volunteers._x000D_ Following a two-year stint as a science and mathematics teacher in a Nepalese village, Phil Deutschle sets off alone on a three-month expedition to conquer Pharchamo, 20,580 feet high, which has claimed several lives and is his final goal in the Himalayas._x000D_ This trek forms the framework of the book, and into it Deutschle weaves the story of his experiences over the previous two years in a series of sharply etched, swiftly moving, often humorous anecdotes._x000D_ Deutschle is not starry-eyed about Nepal and its people or, least of all, about the mission of the Peace Corps. He vividly describes events that are both horrible and poignant: being charged by a rhinoceros, the awful fascination of watching a corpse burn on a funeral pyre, the struggle to save a child's life, scaling a Himalayan peak higher than Mount McKinley (the highest mountain in North America). Despite his difficulties, he steels himself to stay one year, then the full two years, and, imperceptibly, grows so attached to the village that he leaves it in tears._x000D_ Mourning the "small death" of his departure, confused about his identity as an American, and feeling more alienated than before, he sets off on a final, reckless, solo climb of Mount Pharchamo, hardly caring whether he survives. Apathetic from lack of oxygen and from his own malaise and only when his life literally hangs on a slender rope, does he overcome despair and make a gigantic effort to save himself._x000D_ The two parts of the book - the emotional challenge of the village and physical challenge of the climb - come together in a triumphant affirmation of life._x000D_ A native Californian, Phil Deutschle is currently teaching handicapped children in Denmark._x000D_ The Two Year Mountain was originally published by Bradt in 1986 and remains as relevant to the spirit of exploration and real, raw travel writing today as it was then. _x000D_ 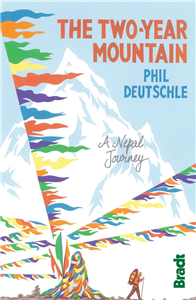 'A remarkable book... Described in very graphic and downright frightening terms.' Chris South, BBC Radio _x000D_ 'I found The Two-Year Mountain interesting as much for the writer's own growth in relating to, and valuing a culture, way of life, and traditions so totally in contrast with that of his own.' Lord Hunt, Leader of the First Successful Mount Everest Expedition _x000D_ 'I have read The Two-Year Mountain with pleasure.' Victor Zorza, The Times, London _x000D_ 'Well worth reading, especially for anyone intending to trek in Nepal. It tells you far more about that endlessly fascinating country than any half dozen of your average climbing narratives.' High Magazine, British Mountaineering Council _x000D_ 'As much an autobiography as a travel book.' The Good Book Guide, Winner of the Queen's Award for Export Achievement _x000D_ '... [Phil Deutschle] .. describes [his journey] here agreeably, in affable, informal style.'_x000D_ Good Book Guide_x000D_

The author's other adventures have included cycling across the Kalahari and Namib deserts, getting captured by pirates while canoeing down the Congo River, hunting with Bushmen, and falling through a crevasse while ice climbing unroped in the Andes. Currently living in Salinas California, teaching physics and astronomy, he says I have never owned a car, which makes me a true counter-culture freak in the US._x000D_ _x000D_

Bradt Travel Guides have a reputation as the pioneering publisher for tackling ‘unusual’ destinations, and producing colourful guidebooks which are entertaining as well as useful.

Bradt Travel Guides Ltd has chosen to review this offer before it proceeds.