This groundbreaking book examines why the majority of Australian school leavers want to go to university and have resisted government attempts to promote alternative forms of tertiary education. The New Inheritors explores differences in young people’s understanding of the purpose of university and their reasons for wanting to enrol. The book reveals that although there has been a general shift in values towards the utilitarian perspective, there is still significant support for the traditional liberal idea of university education as a cultural experience. This support is concentrated in well-educated families, regardless of their financial resources, but there is a substantial number of young people from less well-educated families who have absorbed the liberal perspective. The book begins with an extensive and unique overview of changes in Australian federal government tertiary education policy and changes in the public discourse on education. This overview provides a framework against which differences among today’s students are examined in detail. Drawing on a study of over 200 secondary school students from diverse backgrounds The New Inheritors records their attitudes to university - including access, fees and the role of government – and explores how these are formed by their family backgrounds and influenced by public policy on education. The New Inheritors uncovers the complexity of young people’s attitudes, and what processes occur in the forming and reforming of those attitudes to university and what young people really want from university education. Dr Madeleine Mattarozzi Laming is a Lecturer in Education at Australian Catholic University. She has given numerous conference papers on transition from school to university and teaching students from diverse backgrounds. In 2011 she received an Australian Learning and Teaching Council Citation for an outstanding contribution to student learning, particularly at the first year. 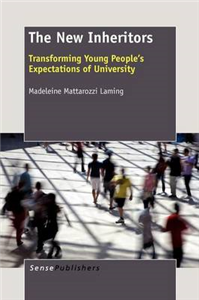