The Story of an African Pride

A bestseller when first published in 1982, The Marsh Lions portrays a vivid picture of life and death on the African savannah through the story of a pride of lions in Kenya's world-famous Masai Mara game reserve. The story is essentially a true one. All the central characters are real, and most of the incidents described actually happened._x000D_ For five years, Brian Jackman and Jonathan Scott followed the Marsh pride and their progeny, painstakingly recording the daily drama of life and death on the African plains. In time they came to regard them as old and familiar friends and real individuals - the big resident males, Scar, Brando and Mkubwa and three lionesses known as the Marsh sisters. Their lives, together with the leopards and cheetahs that shared their wild paradise, offer a unique insight into the unforgiving world of these magnificent carnivores._x000D_ The Marsh Lions were the most successful group to be filmed for Big Cat Diary, the BBC's hugely successful TV series. With Jonathan Scott as co-presenter, The Big Cat Diary camera teams allowed millions of viewers to observe the ongoing saga of the Marsh pride at a time when lions are fast disappearing all over Africa. The Marsh Lions is a powerful reminder of what the world stands to lose if the big cats were to vanish forever and highlights the need to cherish the Mara as one of the most beautiful of the earth's wild places. This edition of the book includes a new chapter bringing the story up to date with the pride as it is now, alongside photos of the new lions._x000D_ The book is illustrated with photographs and drawings by Jonathan and Angela Scott. _x000D_ 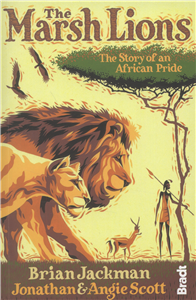 'Brian Jackman writes with a lyrical immediacy of the lions, the wider wildlife and landscapes transformed by the changing seasons .... This descriptive tour de force is required reading for Africa hands both young and old.'_x000D_ BBC Wildlife _x000D_ _x000D_ 'Absolutely stunning...It reeks of Africa. It smells of Africa. The whole thing is just living Africa. It’s a lovely book for the armchair naturalist.' Living World, BBC Radio Four _x000D_ _x000D_ 'I've been reading what is probably the great lion book....This is a book about the real wild lives of lions... Now it's been published again emerging in a fine new dress as a classic.'_x000D_ Simon Barnes -The Times_x000D_ _x000D_ ‘This brand new edition brings the tale right up to date’_x000D_ The Traveller msafiri _x000D_ _x000D_ “ ..... The pages contain so much magic that you will lose yourself. Read it slowly, indulge yourself in the pictures, it is a palpable piece of work keeping all of your senses gainfully employed: smell the approaching storm after months of drought, hear the deep groan of the lion, taste the wild basil and feel the thundering hooves of the returning herds._x000D_ A picture is worth a thousand words; in Brian’s case I beg to differ. Buy this book. Now."_x000D_ Paul Goldstein_x000D_ www.wildlifeextra.com_x000D_ _x000D_ 'This updated version reads like a novel, but traces the real-life movements of Masa Mari's lions, gazelles, hyenas, cheetahs and leopards.'_x000D_ Food & Travel_x000D_ _x000D_ ‘...this beautifully written history of the different generations of this pride over thirty years is both astounding and remarkable.’_x000D_ Good Book Guide

Brian Jackman is an award-winning journalist and author and Britain's foremost writer on African wildlife safaris. He writes for The SundayTimes, and his work appears in The Daily Telegraph, BBC Wildlife Magazine, Travel Africa, Country Living and Conde Nast Traveller, where he is a contributing editor. Jonathan and Angela Scott are award winning wildlife and travel photographers, and the only couple to have won as individuals the prestigious Wildlife Photographer of the Year Award. Jonathan Scott's television presence has blossomed since his early days as a presenter on American television. He has presented his own television series for the BBC, including Big Cat Diary and has also presented wildlife stories for Wild Things, an American television series._x000D_

Bradt Travel Guides have a reputation as the pioneering publisher for tackling ‘unusual’ destinations, and producing colourful guidebooks which are entertaining as well as useful.

Bradt Travel Guides Ltd has chosen to review this offer before it proceeds.