The Life and Death of Pretty Boy Floyd

Charles Arthur Floyd, better known as Pretty Boy Floyd (1904–1934), was one of the last of the so-called Robin Hood outlaws in the tradition of Jesse James, Billy the Kid, and John Dillinger. He engaged in numerous bank-robbing exploits across the Midwest until federal agents and local police shot him down near East Liverpool, Ohio, on October 22, 1934—a feat which helped build the image of the modern FBI. This detailed account of his life, crimes, and death makes extensive use of FBI reports, government records, local newspapers, and contemporary journalistic accounts. Neither highly intelligent nor polished, Floyd relied on his cool demeanor, shrewd cunning, and expert gun-handling ability, but he was also considered by those who knew him to be generous and honest. During the depression, many people saw banks as enemies and Floyd as a hero, and helped screen him from the police. Once he left a large contribution at an Oklahoma church--and no one reported his visit. He was known to drop in at country dances, dance with the prettiest girls, and pay the fiddler well. One story claims that he kept a rural school in fuel one winter. He attended church regularly, even during intense manhunts, and visited his father's grave each Memorial Day, despite the risk of capture. In this biography, Jeffery S. King addresses many of the questions still surrounding Floyd, such as whether he had contact with other notorious outlaws of the period, including Dillinger, Alvin Karpis, and Bonnie and Clyde, and whether he was executed by the FBI. He also links Floyd to the infamous Kansas City Massacre. Particularly notable are King's assessments of the effectiveness of the FBI and of J. Edgar Hoover's talent for self promotion. Jeffery S. King is a freelance writer and retired reference librarian. His articles have appeared in Lincoln Herald, Sepia, and Utah Historical Quarterly. 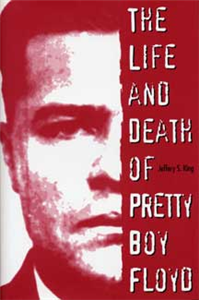