'Sujata Patel has conjured into existence a brilliant treasury of wisdom and insight drawn from leading sociologists throughout the world, including, for example, Latin America, Africa, India, Europe and the United States. This handbook on sociological traditions not only shows their surprising richness and diversity but also provides a valuable toolkit of concepts, approaches and analyses. It is a striking achievement, of which the International Sociological Association can be very proud, to have brought so many independent-minded scholars into so productive a dialogue' - Dennis Smith, Professor of Sociology, Loughborough University

This latest edition to the ISA handbook series actively engages with the many traditions of sociology in the world. Twenty-nine chapters from prominent international contributors discuss, challenge and re-conceptualise the global discipline of sociology; evaluating the diversities within and between sociological traditions of many regions and nation-states. They assess all aspects of the discipline: ideas and theories; scholars and scholarship; practices and traditions; ruptures and continuities through an international perspective.

The Handbook argues that diversities in sociological traditions can be studied at three levels: First, they need to be studied from multiple spatial locations: within localities, within nation-states, within regions and the globe. Second, they need to be discussed in terms of their sociological moorings in distinct philosophies, epistemologies and theoretical frames, cultures of science and languages of reflection. Third, the intellectual moorings of sociological practices are extensive. The papers discuss the diverse and comparative sites of knowledge production and its transmission.

- The Colonial Heritage & its Sociological Traditions: Africa, the Middle East, South Asia and the Caribbean

- Local or Universal: Identity & Difference in the Sociology of the Far East

Wide-reaching in scope and ambitious in its aims this handbook will be a relevant and challenging resource for students of sociology and practicing sociologists across the globe. Its goal is to become a text for debating the contours of international sociology. 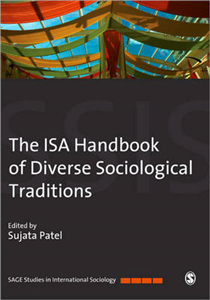